Our favorite Secret Fangirl, Olivia Somerlyn just premiered a brand new single called “O X O.”  She’s been on tour nonstop for the past few months, opening for Meghan Trainor and Lindsey Stirling.   Why “O X O” instead of the usual “XOXO?”  As she wrote on Twitter, “It’s a reverse XOX because you wouldn’t normally give Xs and Os to the people who try to bring you down.”   Listen to the track on Spotify below!

Be sure to follow Olivia Somerlyn & Secret Fangirls for more updates!

Olivia Somerlyn premiered her brand new music video for her single “Parachute” today.  The single, which was co-written and co-produced by Nick Jonas, earned Olivia a spot in the Macy’s Rising Star Contest over the summer.  Her fans have been waiting patiently for the video and it’s finally here!

Watch the official video below.

Pick up a copy of “Parachute” on iTunes or Amazon now. 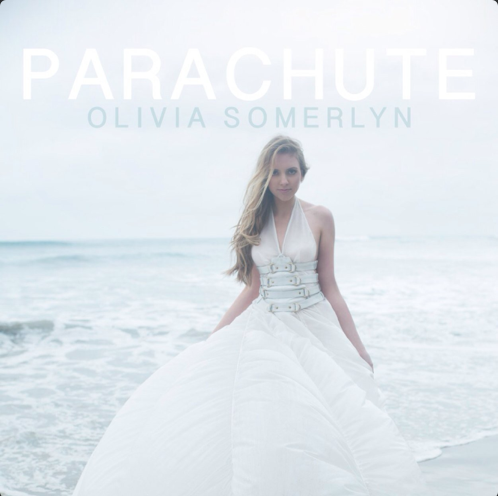 Attention NYC SomerLovers:  Olivia Somerlyn is having a meetup in NYC this Friday, June 20th!

Olivia’s music is super fun to dance to and definitely the perfect summer soundtrack.  Her new single “Parachute” (co-written/produced by none other than Nick Jonas) is out now on iTunes and Amazon.
Come out to a Somerlover meet up and you’ll know why Olivia is the sweetest popstar to emerge in recent years!

We hope you’ve been voting for Olivia in the Macy’s and iHeartRadio Rising Star Contest — this is the final week to vote! 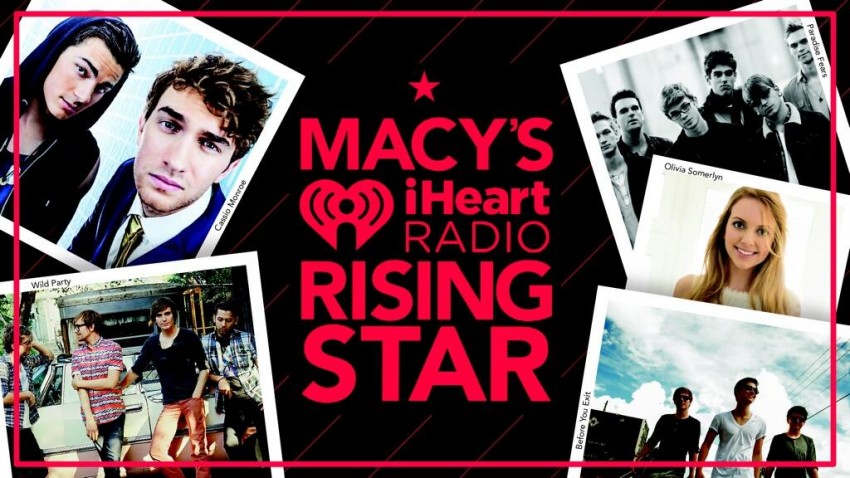 The contestants for the iHeartRadio and Macy’s Rising Star 2014 Contest have been narrowed down to five finalists! Click on the artists name to view their Rising Star profile and to vote for your favorite!

Before You Exit – “Dangerous”

Cassio Monroe – “Under The Lights”

Wild Party – “When I Get Older”

Make sure you vote for your favorite Top 5 Finalist to help them win the ultimate prize – playing the iHeartRadio Festival!

Don’t forget to follow Olivia Somerlyn,  Paradise Fears,  Cassio Monroe,  Before You Exit, Wild Party, and Secret Fangirls on Twitter for the latest on your favorite rising stars! 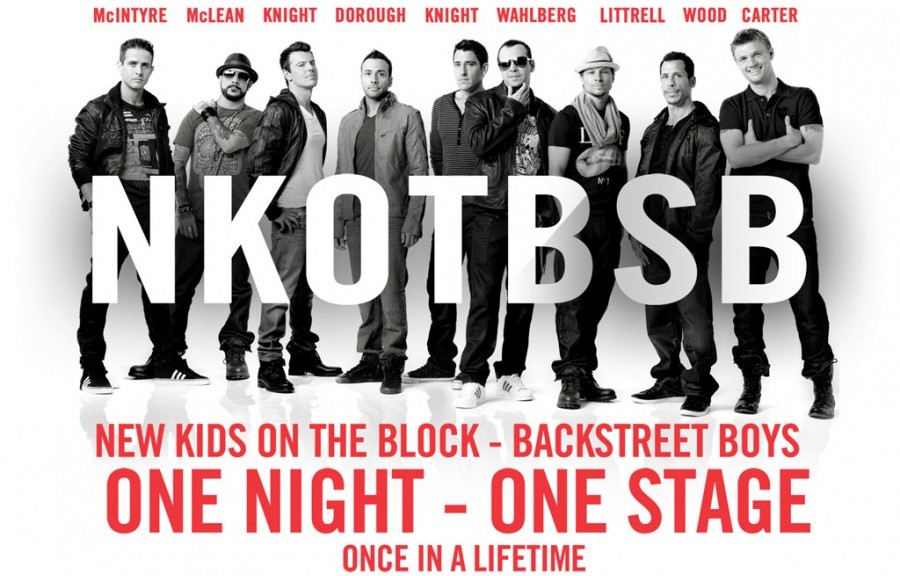 There is nothing better than seeing your favorite artist on tour.   Except when two or more of your favorites team up – then it’s pretty much guaranteed to fall into the best concert EVER category. Or as NKOTBSB billed it:  One Night.  One Stage.  Once in a Lifetime. (or in our case, 3 times.)  Here are some of our favorite tour lineups!

1.  NKOTBSB (New Kids on the Block & Backstreet Boys)
Basically the greatest tour of all time.   Sure anything with these two acts would be amazing.  But the way the show was arranged, with alternate medleys of songs from each group, kept the audience thrilled from start to finish. And they played every song you’d ever want to hear – just giving the fans what they want.  If you’ve never seen Backstreet Boys perform “Everybody” live, you’re missing out! The choreography, set list, stage, everything about this tour was amazing.  It took everyone back in time , be it 1989 or 1999.

2.  The Best of Both Worlds Tour (Jonas Brothers, Hannah Montana & Miley Cyrus)
It’s been years and we still aren’t sure how we managed to snag tickets to this one (as we say in our Fangirl Handbook, we refuse to buy resale tickets!)  But we were there, on the floor, and it was even 10 times more awesome than it looked in the 3D movie. We’d seen Jonas Brothers a couple of times before, but this tour was when they really hit their stride and exploded. And this tour was truly a once in a lifetime event.  Especially now that Hannah Montana is dead.


3. The Package Tour (New Kids on the Block, 98 Degrees & Boyz II Men)
We love NKOTB and their boy band posse. They recruited newly reunited 98 degrees and Boyz II Men for the appropriately titled “Package Tour.” Once again, NKOTB nailed the set, stage, choreography, etc. They’re older now, as are their fans, so they’re at a point when everyone can just relax, have fun and have the time of their lives.  It’s a beautiful thing.  We’re so glad NKOTB reunited and are better than ever!

4. Summer Break Tour (Big Time Rush, Victoria Justice, Jackson Guthy & Olivia Somerlyn)
The perfect name for the perfect summer tour.   We’re huge Victoria and BTR fans so we were thrilled to see them team up!  Openers Jackson Guthy and Olivia Somerlyn were fun opening acts who had us singing and dancing along by the third go round.  BTR doesn’t get enough credit for being a legit boy band, and for bringing back the genre. We’re convinced NKOTBSB and all these amazing things wouldn’t have happened without BTR.  These guys are talented singers and dancers and totally bring it each night. It doesn’t hurt that they share a choreographer with NKOTB – boy band master Kevin Maher.  Now if the New Kids could just recruit Big Time Rush for their boy band posse…

5. Matchbox Twenty & Goo Goo Dolls
We’re 90s fan girls so when we heard Matchbox Twenty and Goo Goo Dolls, two of our favorite bands ever, would be touring together we HAD to go. Mostly because if you had told us 15 years ago we would have the chance to go and didn’t, we would have been very upset with ourselves. Luckily we decided to go and it was more than worth it. Both acts played very solid sets including all of their old material.   It was just as great in 2013 as it would have been in 1996. If you are/were a fan of either group, we highly suggest seeing them live at least once.


You can see New Kids on the Block, Backstreet Boys, and Goo Goo Dolls on tour this summer!

Olivia Somerlyn just released her newest single, “Parachute”, co-written by none other than Nick Jonas (he also co-produced it)!  This song will definitely get her noticed in the iHeart Radio and Macy’s Rising Star contest this year.  Voting begins today and the winner gets to play the iHeartRadio Festival! Click HERE to vote for Olivia.

We love Olivia’s path from Jonas Brothers fangirl to the present. She is the ultimate secret fangirl and she is definitely living the dream! We caught her last year opening for Big Time Rush and Victoria Justice on the Summer Break Tour.  Olivia has tons of energy onstage, and gets everyone in the crowd off their feet and dancing along.

Listen to the single below!

Grab a copy of “Parachute” on iTunes now!  Make sure you follow Olivia & Secret Fangirls on Twitter for more updates!

iHeartRadio and Macy’s have partnered up for the 2014 Rising Star Competition! 25 new and emerging artists have been chosen and are competing for your votes to become the next rising star. The winner will perform at the 2014  iHeartRadio Music Festival with the biggest names in music!

Check out this years list of nominees below, and make sure you vote here for your favorite rising star starting today!  You just  might discover your new favorite artist.

Olivia Somerlyn – “Better With You”

We Are The In Crowd
Temara Melek
A+ Dropouts
Cassio Monroe

My Tweets
secretfangirls
Blog at WordPress.com.