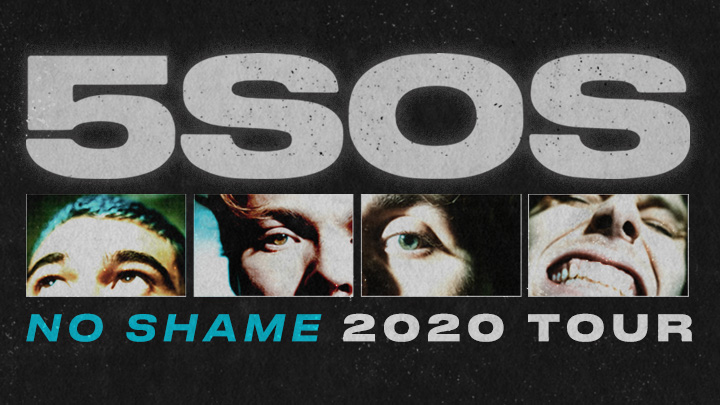 5SOS just announced a HUGE headlining tour hitting major cities across North America kicking off in August and wrapping up in early Fall. Ashton, Calum, Luke, and Michael also announced that every ticket to the tour comes with a physical copy of their new album when it’s released!

Check out all of the dates below.  Tickets for the “No Shame 2020 Tour” go on sale February 7th.

Watch the official tour announcement below!

NO SHAME TOUR • NORTH AMERICA 2020 • EVERY TICKET COMES WITH A PHYSICAL COPY OF OUR NEXT ALBUM • ON SALE 2/7 • https://t.co/Kk8KlvKV4J pic.twitter.com/VCBJpBSDj8

Be sure to follow 5SOS, The Band CAMINO and Secret Fangirls on Twitter for the latest on your favorite artists.

5SOS are kicking off the US leg of their intimate club shows in support of their third studio album “YoungBlood” due out June 22nd but the Aussies couldn’t make us wait any more.  Michael, Ashton, Calum, and Luke announced a Summer tour kicking off in Toronto at the end of August and taking them across North America through October.

Tickets go on sale Friday April 13th at 10AM local time and these will sell out fast!  Check out all of the dates below.

Watch the official video for “Want You Back” below!

Grab a copy of “Want You Back” on iTunes or Amazon so you can sing along on tour. Our Aussie boys have been teasing us for the past week they finally spilled the beans!  5SOS just dropped a brand new song called “Want You Back,” making this their first song in almost two years.  Since they’ve been gone, Ashton, Calum, Luke, and Michael took some time to regroup and figure out what life is outside of being on tour.  It did them well because this song is UUHH–MAAZIINGG!!!!   We can’t wait for everything they’ve got in store for 2018 and where the year will take them.

Listen to the new track below on Spotify!

5SOS also announced a surprise tour for Spring hitting cities across Europe and North America! Check out the dates below and grab your tickets when they go on sale March 3rd at 10AM local time.

Grab a copy of “Want You Back” on iTunes now! 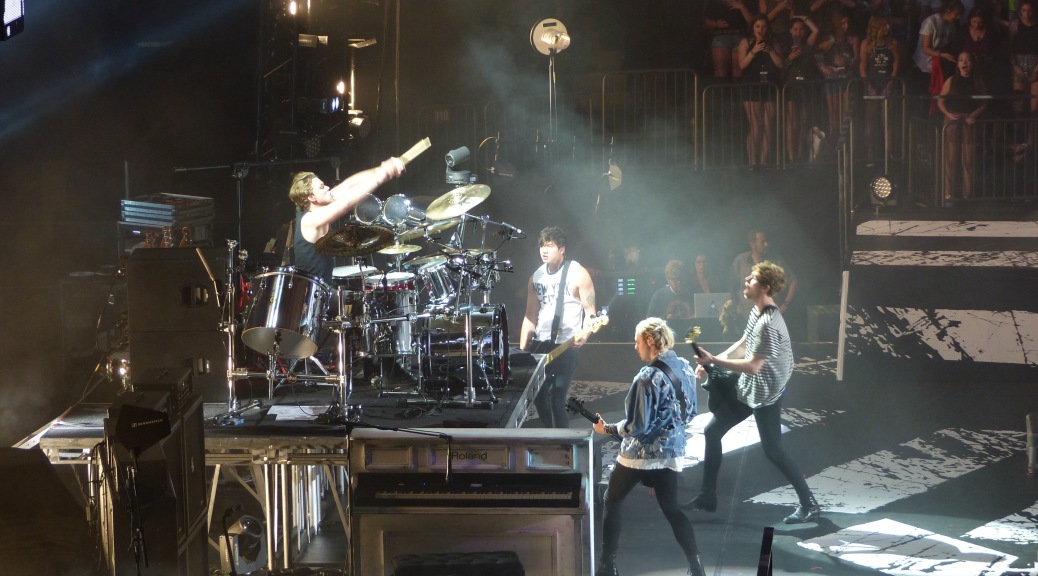 We can officially say “5SOS sold out MSG!!!”  That’s a feat of epic proportions, especially for a band that hasn’t been around that long.  It’s hard to believe that just two short years ago the guys were headlining the nearby Best Buy Theater, which holds about 2,000 people.  Luke, Ashton, Calum, and Michael played every song we could have asked for on this tour and you could hear the entire arena singing every word!

The band played their new single, “Girls Talk Boys,” for the first time live at MSG.  The track had just dropped the day of the show, but fans already knew all of the words and kept singing like they had been all night.  The performance of the funky song saw lead singer Luke Hemmings jump on the piano for a bit – cue the swoons.

Drummer Ashton took the time to remind the crowd to always follow their dreams, saying he went from playing in his garage to playing in the legendary Madison Square Garden.  He also said the crowd was the loudest he’d ever heard, despite having played many other shows.

Before going into the first verse of “Jet Black Heart” solo, Michael soaked up the applause from the crowd.  Just when you thought he was going to keep going, the crowd just got louder and louder.  It was one of the most energetic crowds we’ve ever seen at MSG (or anywhere for that matter!)  We’re so proud of how far 5SOS have come so far and can’t wait for what’s next!

The “Sounds Live, Feels Live” Tour will be hitting venues across North America all Summer long!  Check out the dates here and get your tickets now!  Make sure to pickup a copy of “Girls Talk Boys” on iTunes now so you can singalong!

Our favorite Australian pop punk boys just released a brand new track from the Ghostbusters movie called “Girls Talk Boys” and it’s funky!! These guys know how to rock and definitely how to roll with the new track.  Luke, Ashton, Calum, and Michael are so good, this song is totally different from everything on their new album, “Sounds Good, Feels Good” but it will have you dancing and grooving the whole time.

Listen to “Girls Talk Boys” below.

The guys are in the middle of their huge “Sounds Live, Feels Live” World Tour so be sure to grab tickets while you still can! Check out all of the dates here.

Grab a copy of “Girls Talk Boys” on iTunes or Amazon now.

5SOS just dropped the music video for their new single, “Jet Black Heart,” from their sophomore album “Sounds Good, Feels Good.” The band reached out to their fans to hear their stories and included some of them in their music video.  Ashton, Calum, Michael, and Luke wanted to show off their fans and the many different walks of life that 5SOS fans come from.  Watch the video below!

Hey everybody!  5SOS’ new album is finally here!  Here’s your weekend playlist.  Be sure to pickup a copy of “Sounds Good, Feels Good” on iTunes now!

We’re still fangirling over the news that 5SOS is releasing their second album, “Sounds Good Feels Good” in October!  Pre-orders for the album went up today(8/14) along with the release of a new track, “Fly Away!”  We’re also fangirling over the fact that our 5SOS “Rock Out With Your Socks Out” show is (finally) just 3 weeks away!  Here are 5 of our favorite 5SOS tracks .

1. “She’s Kinda Hot”
5SOS’s new single is a rock anthem for the generations.  We can’t wait to hear this live and ROCK OUT!

3.”Don’t Stop”
The video for “Don’t Stop” brought out 5SOS’s inner super hero alter-egos but this song makes us feel like dancing like nobody’s around.

4. “Lost Boy”
We love the non-cheesy Peter Pan nod in this song!

5. “Social Casualty”
This song all but name drops both Greenday and All Time Low from the lyrics to the music – of course it’s one of our favorites! 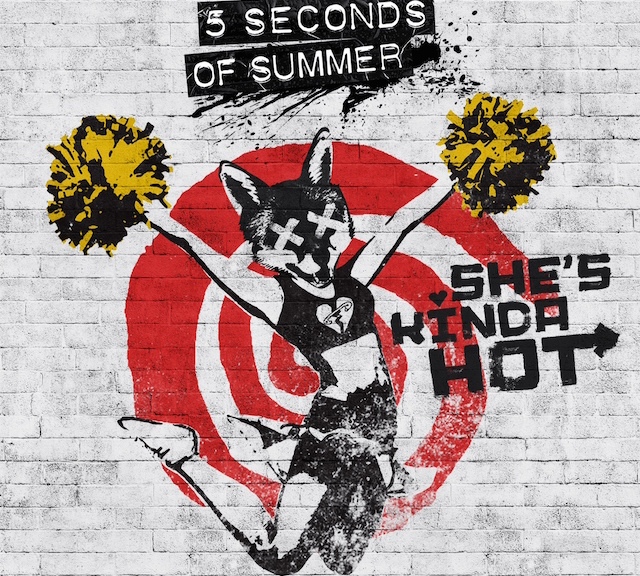 5SOS just released the music video for their new single, “She’s Kinda Hot,” and we kinda love it.  The video follows Ashton, Callum, Luke, and Michael as they build their very own Mad Max-inspired musically driven tank as a beacon of hope for the outcasts and rebels of the neighborhood!

Watch the video below and pickup a copy of “She’s Kinda Hot” on iTunes now!

Make sure you get your tickets to the US leg of the “Rock Out With Your Socks Out Tour” now!  Check out all of the dates HERE.

After keeping fans guessing with 5onthewall.com and weeks of anticipation, 5SOS just released their new single, “She’s Kinda Hot!”  The track is out just in time for the North American leg of the Rock Out With Your Socks Out Tour, which starts tonight in Las Vegas! The catchy track was co-written by Benji and Joel Madden of Good Charlotte.  Watch the lyric video below and get ready to sing along at your show!   (The tour was announced over a year ago, and IT’S FINALLY HERE!!!  #Fangirling hard)

Check out the dates for the Rock Out With Your Socks Out Tour below!

Be sure to follow 5SOS and Secret Fangirls for more updates!