Sam Hunt brought his first headlining tour, The Lipstick Graffiti Tour, to NYC last night.  The show, which took place at Irving Plaza, sold out within minutes of going on sale.  And who said New Yorkers don’t like country?  It’s been a whirlwind 8 months for Sam since he signed with MCA Nashville and released “Leave The Night On” last summer.  He gathered support by working as a songwriter in Nashville, writing tracks for Keith Urban, Billy Currington and more, before releasing his “Behind The Pines” mixtape for free online last year. 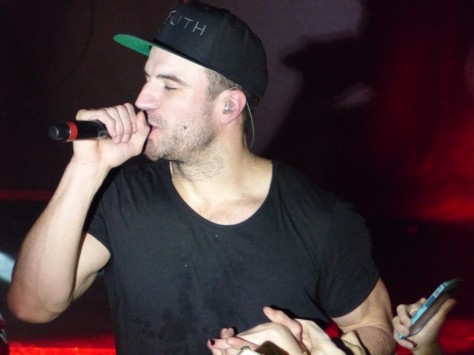 His set included tracks from that mixtape and his debut album, “Montvallo,” as well as the songs he penned for other artists.  Do “Cop Car” or “We Are Tonight” ring any bells?  We love going to country shows because they are usually one big singalong – the audience knows every word, and last night was no exception!  You could see how much it meant to Sam to have so many people singing along to the songs he wrote – he seemed genuinely touched.  It’s one thing to be a good songwriter, but Sam is also a talented performer. You can tell how passionate he is about music, and how much he loves being on stage.  It’s just not a good concert unless you get chills at some point, and despite the hot venue we had chills over and over again.  Throughout the set he interacted with the crowd, even coming down to the floor to have a “House Party” with the lucky fans in the front row!  And we’re pretty sure the girls he sang “Take Your Time” to are still recovering from their fangirl coma. 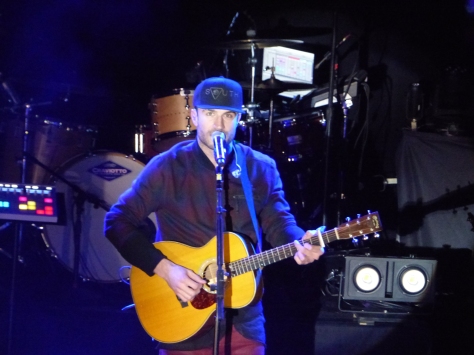 There is a lot of talk about what country music is now, and if Sam should even be considered a country artist.  But fans aren’t so concerned with what genre an artist is – they just want good music! And he introduces new fans to the country genre, is this such a bad thing?  We’ve all grown up listening to a variety of artists, Sam included, and you can hear the range of influences in his music. Between each song he played, he sampled tracks from everyone from R Kelly to Jay Z to Miley Cyrus, yet this all worked together.  An acoustic medley of 90s songs was also a highlight of his set.  The band led a singalong of hits by Reba, Mariah Carey, Destiny’s Child and Deana Carter.

Opening act Native Run got the crowed pumped up with an energetic set, including a cover of TLC’s “Waterfalls.”  We were majorly impressed by Rachel Beauregard totally crushing Lisa’s rap. TLC, if you need some help on the Main Event Tour this summer, give Rachel a call!  If you’re heading to a Lipstick Graffiti Tour stop, make sure you get there early to check them out. 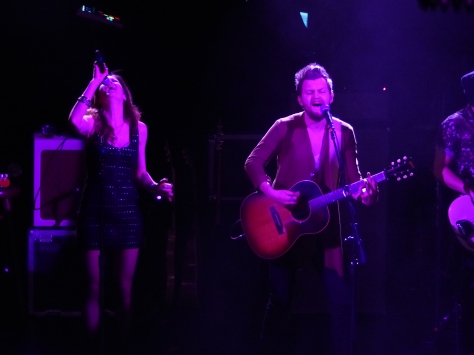 The Lipstick Graffiti Tour continues through April (and is mostly sold out), but you can catch Sam alongside Hunter Hayes and Lady Antebellum on the Wheels Up Tour this summer. Can you say dream tour lineup? If you have a chance to see Sam on tour, GO! He’ll be headlining much bigger venues, very soon. 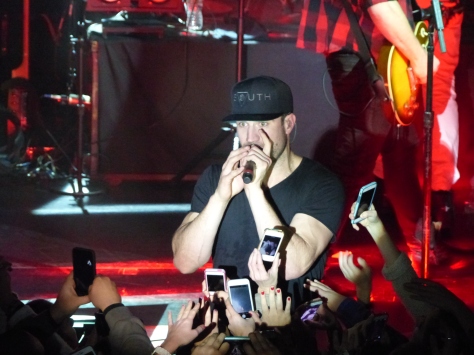 Be sure to follow Sam Hunt, Native Run & Secret Fangirls for more updates! Sam Hunt just announced his first headlining tour, kicking off in West Hollywood in January!  And, best of all, he’s making a stop in NYC!  (Loyal Secret Fangirl readers will know this is a huge deal for us.)  We love how Sam’s unique mix of country and R&B influences blend into his distinct sound.   He’s also an incredibly fun artist to watch live.  Even on his opening spot on the “Up In Smoke Tour,” the whole crowd was singing along.

You don’t want to miss this one – Sam’s single “Leave The Night On” has gone platinum, and his first album “Montevallo” debuted at #1 on the country charts.  He just sold out his first headlining show on Long Island next week, and we’re sure he’ll be selling out arenas one day.  Pre-sales start Wednesday Nov 12th,  and general on sales begin Friday Nov 14th!

Check out the full list of “Lipstick Graffiti” Tour dates below.  Sam is bringing fellow country artists Michael Ray and Native Run along for the ride.

Watch Sam Hunt perform his new single “Take You Time” live at the Best Buy Theater in NYC on the Up In Smoke Tour.

Pick up a copy of Sam Hunt’s debut album “Montevallo” on iTunes or Amazon now so you can sing along on tour!

We caught the American Dream Tour last week when it hit Irving Plaza in NYC.  It was an awesome lineup already, with Tiffany Houghton and Action Item opening for MKTO.  But we were even more excited when an old favorite, Patent Pending, was added to the New York show!

We unfortunately only got to see the tail end of Patent Pending’s set, but their energetic live show and infectious energy had the entire crowd pumped up.  Check out their latest project, Mario & The Brick Breakers.

Tiffany Houghton was up next!  We discovered Tiffany when she followed us on Twitter one day, and we’re so glad she did!  We instantly fell in love with her pop country sound and fun style.  Her live performance did not disappoint.  Tiffany is a perfect blend of sweet and sassy, just like her new single “The Best.”  Of course our favorite moment of her set came when she sang “Band Boy,” complete with a cover of 5SOS’ “She Looks So Perfect.”  She certainly won over all of the fan girls in the audience (she’s one of us!)  Watch her performance below.

We were majorly impressed with MKTO, especially as Tony Oller has been dealing with laryngitis. (They had to reschedule their Philly stop!)  He still sounded great – if he hadn’t tweeted about it, we would have had no idea!  What a trooper.  Tony and Malcolm did an outstanding cover of Nico & Vinz’s “Am I Wrong.”

They played most of their debut album, including tracks like “Heartbreak Holiday,” “Forever Until Tomorrow,” “Thank You,” and of course their summer hit “Classic.”

If you can make it to the American Dream Tour, go!!!  There are a few shows left before the tour wraps up in Chicago next week.    MKTO will also be back in NYC for the US Open Arthur Ashe Kids Day on August 23rd with Hunter Hayes & The Vamps!  Get more info HERE!

We finally have the name of Heffron Drive‘s debut album – “Happy Mistakes!”  The album will be released later this fall on Tolbooth Records.   The guys  (Kendall Schmidt of Big Time Rush and guitarist Dustin Belt) are also going on tour later this summer in support of the album.  Check out the first round of dates below!

Tickets go on sale this Friday, August 1st.  Check with the venue and the Heffron Drive Facebook for pre-sale info!  There will also be VIP packages available, which include access to a sound check party with a Q&A session, and a photo with the band.  Stay tuned for more tour dates!