Backstreet Boys’ resident heartthrob and newlywed Nick Carter and New Kids On The Block’s Jordan Knight had so much fun on the NKOTBSB tour they decided to team up and keep the party going.  Nick & Knight are teaming up for an album and tour this fall. The duo celebrated the release of their debut album with a party at Highline Ballroom in NYC. 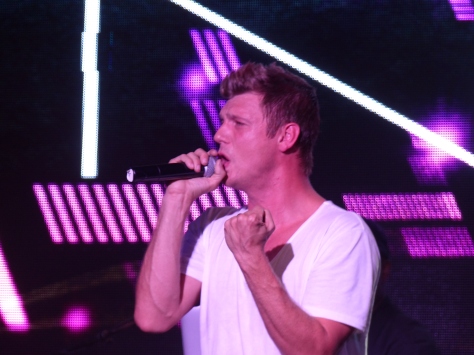 Nick and Jordan performed quite a few  songs from the album including “Switch”, “Halfway There” (with Jordan on piano) and  “Deja Vu” which was co-written by Brandyn Burnette!  They also took questions from the fans, revealing more about their upcoming tour. (Trust us, it sounds amazing!)  Jonathan Knight came out to support his brother and even mingled with the crowd, taking selfies with everyone.  Nick brought out his own laptop and did double-duty, showing off his DJ skills during the release party.

Nick and Jordan even previewed some choreography they’ve been working on for the tour! Watch a live performance of “Switch” below! (The track, one of our favorites on the album, was co-written by Bruno Mars)

They said they will play solo material for the Nick & Knight tour later this fall and topped the evening off with Jordan performing “Give It To You.”  We are still fangirling over this, because this was our JAM in 1999, and we voted for it on “TRL” almost daily.

Pick up a copy of Nick & Knight’s album on iTunes or Amazon now and check out all of their upcoming tour dates HERE!

Last night marked the last date on the North American leg of Backstreet Boys’ In A World Like Tour.  The tour, which started last summer in celebration of the band’s 20th anniversary, has ended up being the longest in BSB history.  As they said to the packed crowd at Jones Beach, this tour surprised their agents, critics and even them:  it’s amazing to see how much love and support they still have after all these years!  They played all of their hits, as well as tracks off of their new album, “In A World Like This,” as the audience partied like it was 1999.  A Backstreet Boys concert is like one giant singalong/dance party, with 15,000 of your closest friends.

About halfway through the concert, it sunk in that we wouldn’t be seeing the BSB on tour for a while.  But then we realized us Backstreet fan girls have a lot of other things to look forward to this year!

Backstreet Boys:  The Movie
A documentary on the BSB, filmed mostly last year during their 20th anniversary “reunion,” was announced last year, and we are still impatiently waiting for a release date!  The trailer for the movie has been shown during the IAWLT tour since last summer.  Now that this leg of the tour is over, we are hoping we will finally get a release date!   And an excuse to sing and dance in the movie theater.

Nick and Knight Album and Tour!
Nick Carter is so much fun to watch on stage, because he just brings his A-game each and every night.  He tends to do his own choreography, and is moving non-stop on stage.  You can see the pure joy he has in performing.  He’s teaming up with NKOTB’s Jordan Knight for an album and tour this fall, titled Nick & Knight!  Jordan also BRINGS IT each night on stage, so we cannot WAIT to see what these two will be up to on tour.  It’s going to be amazing.

“I Heart Nick Carter”
This isn’t Nick’s first foray into the world of reality TV (House of Carters anyone?), but this time around the show focus on Nick’s life with his new bride, Lauren Kitt, rather than Carter family drama.  We will only watch reality shows that star current or former boy band members, so obviously we have already been counting down to the show’s premiere!  Watch the first look below!   “I Heart Nick Carter” premieres on September 10th at 10pm on Vh1!

Stay tuned for updates on the rest of Backstreet’s  upcoming projects!  Be sure to follow Backstreet Boys & Secret Fangirls on Twitter for more updates!