One of our favorite Artists To Watch, LA-based boyband Phase V recently released their next single called “Never Gonna Give You Up”.  Nope, you’re not getting Rick Rolled on this one, they did sample that now iconic song on the latest track!

After successfully reaching (and surpassing) their Indie Go-Go campaign goal, Phase V have been hard at work in the studio and on stage making sure their fans get the best live show and EP possible.  We love Phase V because they are a legit boyband – synchronized dance movies, harmonies and all.

Listen to Phase V’s new single “Never Gonna Give You Up” below and help keep the boyband tradition alive!

Pick up a copy of the single on iTunes now so you can sing along when you see them live!

Be sure to follow Phase V and Secret Fangirls on Twitter for the latest on your favorite new artists. 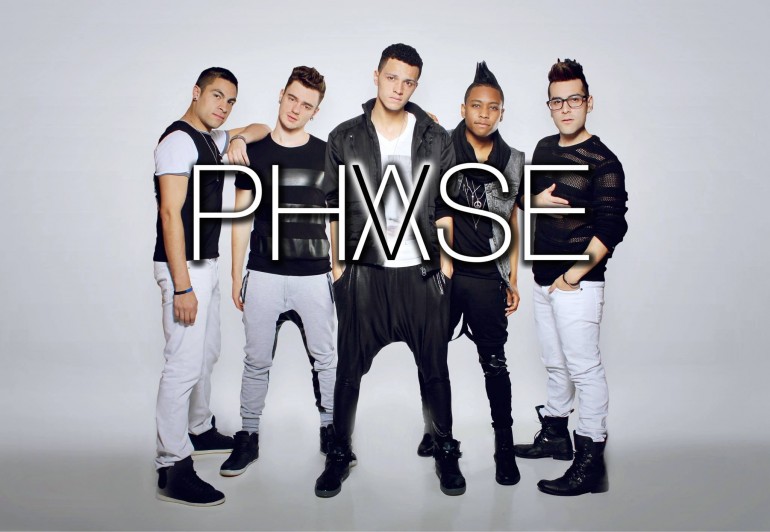 LA based boyband Phase V have launched an Indie Go-Go campaign to help fund their debut EP.  They’ve released a single so far and have performed with more than a few big names.  We love that they are staying true to the boyband genre, with smooth harmonies and dance moves.  Now, Phase Five are setting their sights on releasing their debut EP.  Contribution perks include anything from a signed Phase V poser, to Skype session with the band, a chance to hang out with the band in the recording studio, even a date with your favorite Phase V band member!

Watch the announcement from the band below and if you are able to spare a few dollars, click HERE to support the future of true boy bands!

Pick up a copy of the bands first single, “Drop It” on iTunes or Amazon.

Be sure to follow PhaseV and Secret Fangirls on Twitter for the latest on your new favorite artists!

Phase V is truly a modern boy band, or as they call themselves an “urban-pop boy band.”   We love that they are a boy band in the classic sense of the word:  They sing, they dance, they sing while they dance – they’ve got it!  (The right stuff.)  Phase V’s brand new single, “Drop It” is out now and it’s everything you need in a summer jam.   As fangirls of 90s boy bands, it’s safe to say that Phase V might be our new favorite artist to come out the recent 90s resurgence.

Be sure to pick up a copy of Phase V’s “Drop It” on iTunes and Amazon.  Watch the official video below.

We hope these guys go on tour soon (and play in NYC) because we’re going to need to experience their smooth harmonies and sharp dance moves in person!   They also did a cover of Justin Timberlake’s “Not a Bad Thing,” which we’ve always said would sound great with a 5-part harmony.

As we’ve written before, there seems to be a lot of confusion in the media as to who is a boy band and who’s not.  We prefer to use boy band in the original sense of the word, like the originals New Edition and New Kids on the Block. You can even consult the dictionary: a boy band is a group of young men who sing in harmonies and DANCE!   Here are some of our favorites!

1. Big Time Rush – “Boyfriend”
Big Time Rush doesn’t get enough credit for bringing boy bands back into fashion. Before their show premiered in2009 we had all been living in a sad boy band less world for years. True BSB have been going strong for over 20 years, but we hadn’t seen any NEW boy bands since the golden era in the early 2000s, when a new band seemed to emerge every week.   BTR has the moves, looks and harmonies of a classic boy band. Now that they are in the “I’m just going into space / I’m just going to record this solo project, probably no one will hear it” phase of their band, we are hoping that they reunite for at least one more tour.  They keep saying it ain’t over!  We love their mashup of Justin Bieber’s “Boyfriend,” with their song of the same name.  Complete with a hat dance!

2. Titanium – “Unarmed”
AKA New Zealand’s first boy band!  The deprived nation held a rigorous competition, which included a boy band boot camp, to find the 6 members of the band.  They’ve even written songs with BTR members Kendall Schmidt and Logan Henderson. There were rumors of a joint Big Time Rush & Titanium tour  for a while, and we’d just like to put in a formal request to make that happen.

3. Midnight Red – “Hell Yeah”
They call themselves America’s boy band, and with good reason.   They have harmonies that melt you, and have done solid covers like “Diamonds” by Rihanna and even NKOTB’s “Step by Step!”  They got the ultimate boy band seal of approval when NKOTBSB recruited them to open for their tour, making Midnight Red officially a part of the boy band posse.   And we’re sure they wouldn’t back down to a dance off with BSB! (Can we have this? Thanks!)

4. Phase V – “Not a Bad Thing”
One of the newest boy bands on the block, is the self described Urban-Pop boy band. They’ve posted covers of “Not a Band Thing” by Justin Timberlake, which we’ve always said was meant for a 5 part harmony, and “Drop It” by Trevor Jackson.  We hear they’re working on an *NSYNC cover as we speak and we can’t wait!   We love that these guys dance and stay true to the boy band genre and are looking forward to hearing more from them!