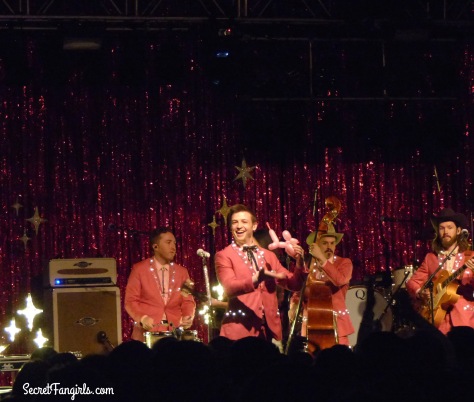 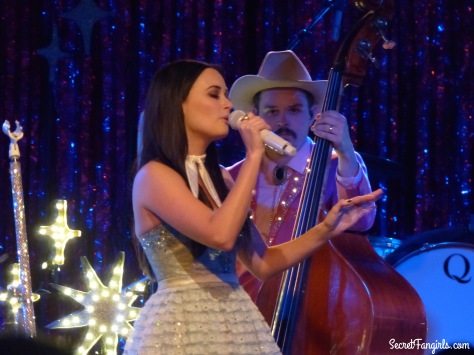 Kacey Musgraves is set to add a little sparkle to your life in the new year! She just announced a string of brand new tour dates for her Country & Western Rhinestone Revue for early 2016!  Check out the dates below.  The new dates go on sale this week, with pre-sales starting tomorrow. Check with your venue for details.  Fangirl tip: Tickets make great Christmas presents!

Pick up a copy of Kacey’s new album “Pageant Material” on iTunes now.

Country star Kacey Musgraves served up some Southern style at The Paramount Theater in Long Island, NY over the weekend.  She performed tracks from her new album, “Pageant Material,” which was just released last month, along with hits from the Grammy winning “Same Trailer, Different Park.”  We love Kacey’s style – her set was made to look like a sunset over the Texan desert, complete with neon cactus lights.  Her 5 piece band wore their signature light up suit jackets, and played everything from the steel guitar to the upright bass to the banjo.   They joined Kacey at the front of the stage at the end of the evening for “My House,” doing a little do-si-do. 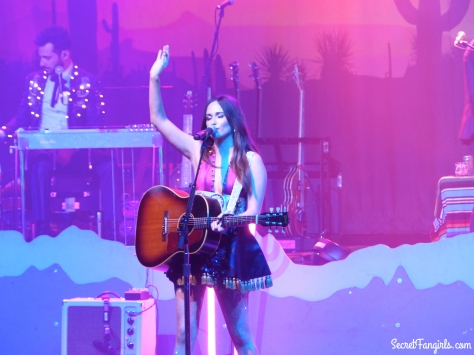 Throughout the evening, Kacey showed off her vocal range and clever songwriting skills.   Other highlights of her set included a country version of TLC’s “No Scrubs” and a cover of Miranda Lambert’s “Mama’s Broken Heart,” which Kacey penned.  She also filled the audience in on the inspiration for some of the tracks on her new album.  When she was 11 a crazy stage mom called her a “dime store cowgirl,” which Kacey ended up turning into a song.  She gave a  shout out to her “momma” who was in attendance.  We’re sure that even though Kacey’s “not Pageant Material” she’s still proud!

The crowd was singing along to every word, even the newer material.  Kacey took time near the end of the set to individually point out and thank fans in the crowd (by name!)   Some had made her unique gifts, others had been to countless shows, and a young girl had asked Kacey to sign her guitar before the show.

She closed out the show with an encore that began with a solo acoustic performance of “Cup of Tea” before her hit “Follow Your Arrow.”  Kacey came back out wearing light up boots for a country version of “These Boots Are Made For Walking” which had the whole venue rocking.   She thanked the crowd one final time and wished them safe travels before doing an acapella version of “Happy Trails” with her band. 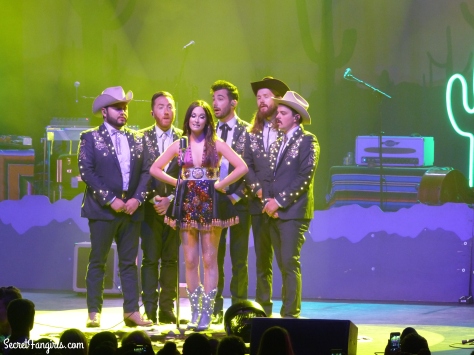 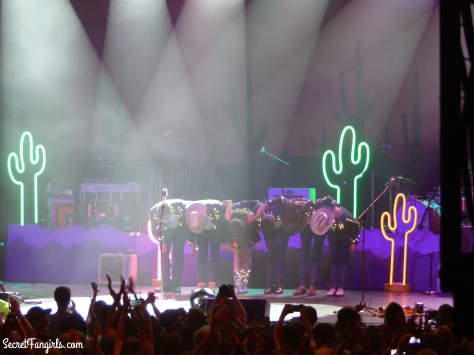 Kacey Musgraves just released her new album, “Pageant Material,” and she’s taking it on tour this fall!   The Kacey Musgraves Country & Western Rhinestone Revue is hitting venues across the US, including the famed Apollo Theater in New York City.  Check out all the dates below! 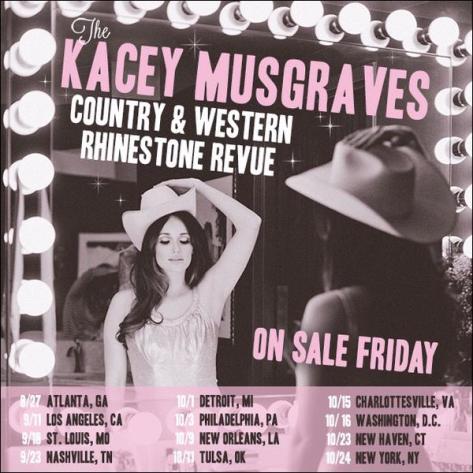 Watch the video for “Biscuits” below and pickup a copy of “Pageant Material” on iTunes now!

Kacey is on a roll and her brand new video for “Biscuits” is nothing short of a warm fluffy appetizer for her brand new album “Pageant Material” out on June 23rd!  As usual, we love Kacey’s style (check out her band’s light up suits!)  The video is a throwback to old school variety shows, or as Kacey describes it “Hee Haw meets Pee-wee’s Playhouse meets Wes Anderson.”  Watch it below!

It’s Memorial Day Weekend which mean’s it’s officially Summer!  We’re looking forward to all of the outdoor concerts, BBQs, and of course some new music!  Here are some of the albums dropping this Summer we can’t wait for!

1. Canaan Smith – “Bronco” out June 23
We’ve had Canaan’s EP playing nonstop, and earlier this week we got to hear more tracks off of the album at a show in NYC.  This album is going to be GOOD.
Pre-Order a signed copy of “Bronco”

4. Thomas Rhett – Title and Date TBD
While we don’t have any official info yet, Thomas is expected to drop his new album later this Summer.  We love what we’ve heard so far, with the funky lead single “Crash and Burn” and also tracks that he’s been playing live, like “South Side” and the beautiful “Die A Happy Man.”
Buy “Crash and Burn” on iTunes

5. Cody Simpson – “Free” out June 23
This will be Cody’s first album he’s done entirely on his own, free to create the music he’s wanted to all along.  Cody and his music are pretty much the definition of a laid back Summer by the beach.
Pre-Order “Free” on iTunes

We’ve been minding our own biscuits, wondering when Kacey Musgraves would be releasing a new album.  After serving up a fresh hit, “Biscuits,” earlier this year, Kacey just announced her sophomore album, “Pageant Material” will be out June 23rd!  Kacey co-wrote every song on her new album with many of the same collaborators behind her GRAMMY-winning debut, “Same Trailer, Different Park.”  She also noted that the entire album was recorded live in the history RCA Studio A, giving the album “a more concise, classic sound,” as Kacey wrote on her Facebook page.

Check out the official tracklisting below and pre-order a copy today!