We first met We Were Sharks several years ago and now they’re back with an epic new record, “New Low,” due out May 21st via Revival Recordings.

The record comes out of the gate swinging with the massive track, “Shameless” with a giant “F*CK YOU” inspired by co-writer and Silverstein guitarist, Paul Marc Rousseau’s in-studio admission of faking happiness while being absolutely miserable.

When asked about the new album, lead vocalist Randy Frobel shares, “‘New Low’ is a collection of songs that focuses on being down but not out. Since the release of ‘Lost Touch,’ we’ve experienced many of life’s ups and downs. We’ve lost relationships, friends, and family, and have gone through a lot of unexpected challenges that life has a tendency to throw at you when you least expect it. However, no matter what may have tried to keep us down or hold us back, we always take it and keep pushing forward.”

The record is full of massive sing along choruses and mosh pit starters liken “Bring Me Down,” and “Omens,” alongside pop punk ballads like “Burning House,” which reminisces on an old flame that’s swallowed up your entire world and left it in ashes.

The latest single ahead of the album release, “Over This,” will have fans screaming along and hitting replay immediately. About the track, guitarist Jason Mooney said: “A lot of songs tell stories, but when we talked about what ‘Over This’ was going to be about we decided to talk about a feeling or a vibe rather than go the narrative route. We wanted to talk about a feeling you have when you find yourself in a place in life where you should be filled with joy, happiness, pride, and essentially every positive feeling imaginable. Instead you feel lost with no sense of enthusiasm. Although you should appreciate the moments, you feel like you would rather be doing absolutely anything else and be anywhere else than where you are right now.”

We Were Sharks also wrote a lamenting follow up to the blisteringly fast “Ashley” from the last record, aptly titled “Ashley (Part 2).” Just as fast but a little bit longer, “Ashley (Part 2)” clocks in at one minute and 58 seconds but still captures the feelings of young love lost due to growing up. “The original ‘Ashley’ was a fun, fast song we’d had kicking around for years, but we hesitated to put it out because putting out a 70-second song is a death sentence,” said guitarist Colin Jacques.

The Canucks are proving they can’t be pigeonholed with their latest record and we can’t wait for shows to return to see how these translate to a live audience.

Watch the official video for “Over This” below!

Pre-save “New Low” on your favorite streaming platform or pick up a pre-order bundle from We Were Sharks’ official site and get exclusive merch, vinyl variants, and more!

Be sure to follow We Were Sharks and Secret Fangirls for more on your favorite artists. 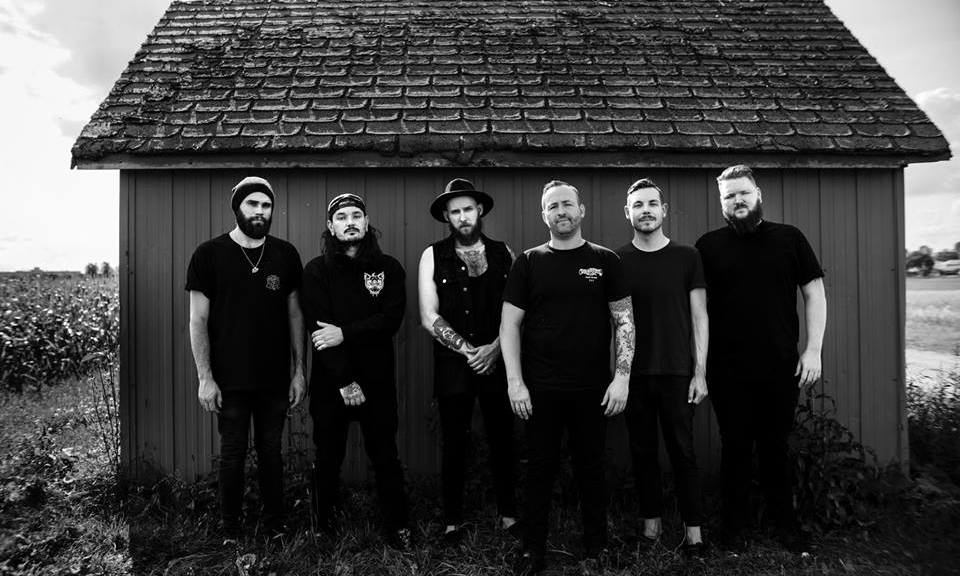 We Were Sharks are ready to get Summer started early with a headlining tour with their friends in Boys Of Fall hitting cities across the US starting at the end of April.  We Were Sharks latest album “Lost Touch” has been on heavy rotation over here and we can’t wait to see these guys again!

When asked about touring with Boys Of Fall again, We Were Sharks guitarist Jason Mooney says, “We loved watching them every single night and are stoked to do it all over again and for a whole lot longer. We’re excited to see some familiar faces on this tour, as well as meet a bunch more. Better yet, we get to finally play a lot more from Lost Touch with an audience who we hope are more aware of it. We want to see everyone have as much fun singing along to these songs as we do playing them. See you at the shows, drop by the merch table and say hi!”

Boys Of Fall, Floods, RivalTown, and My Life On Film will be joining We Were Sharks on tour bringing the rock every night so make sure to get your tickets before they sell out!  Tickets available at WeWereSharks.com.  Check out the dates below.

Watch the official video for We Were Sharks “Hotel Beds” below.

Grab a copy of “Lost Touch” on iTunes and Amazon now so you can sing along tour!

We Were Sharks are heating things up ahead of their hotly anticipated album Lost Touch dropping on February 23rd through Victory Records.  We can’t get enough of the Cananadian group’s refreshingly bright and equally melencholy sound on the new album.  We got the chance to sit down with singer Randy Frobel during their headlining tour in Brooklyn, NY and he’s just as charming as you’d expect! We Were Sharks brought their high energy set to Gold Sounds Bar, showing NYC how Canada parties.

Watch our interview below and see what Randy’s favorite song on Lost Touch is, his must-haves on tour, and who caught him totally fangirling in Ottowa recently.

Be sure to pre-order a copy of Lost Touch on iTunes or Amazon now!

Our latest Artist To Watch, We Were Sharks are hitting the road early in 2018 to gear up for the release of their brand new album Lost Touch on February 23rd.  The album is called Lost Touch but We Were Sharks haven’t lost touch with the genuine feeling and joy that pop punk brings to the entire scene.

“Beyond Repair” kicks off the album like shattering the glass walls surrounding the album.  Lost Touch as a whole shows the obvious personal and musical growth of the band from their previous releases and brings them to the forefront of the genre.  We Were Sharks are poised to take their rightful spot on the list of our favorite releases for 2018 so far.

“Hotel Beds” is a stand out track with the bouncey scream along chorus and contrasting verses.  However, “Stay” is the pinnacle of the album.  Lyrically and musically, “Stay” is the closest the band comes to radio perfection on the album which should be more than enough to push them through to Summer song playlist domination.

Broadside’s Ollie Baxter brings his sugary sweet vocals on “Late Bloomer.”  The track centers on the topic of keeping a hold on things you loved when you were young.  Ollie brings that something we were missing and really catapults the album through to the end.

Lost Touch is a solid listen start to finish filled with odes to the glory days of pop punk and sing along choruses.  We can’t wait to see what the future holds for We Were Sharks!

Lost Touch will be released February 23rd through Victory Records.  Pre-order bundles are available HERE and include exclusive items like posters, t-shirts, and hoodies.  Pre-order your copy on iTunes and Amazon so you can sing along on tour!

Catch We Were Sharks on the road all February long with Belmont, Boys of Fall, and Sink The Ship! Check out the tour dates HERE and get your tickets while they last.

Be sure to follow We Were Sharks and Secret Fangirls on Twitter of the latest on your new favorite artists!

We Were Sharks are Canada’s newest poster boys for the fast, aggressive, fun pop punk you know and love! After releasing their debut EP in 2012, solidifying a six man lineup, and amassing over 1 million plays on Spotify on their single “Bridge Burner,” We Were Sharks are poised to take a bite out of the American pop punk scene.

Consisting of Randy, Jason, Will, Steve, Josh, Colin, We Were Sharks spent the end of 2017 burning up highways with Carousel Kings and A Whilhelm Scream.  The band is kicking off 2018 in style with a huge tour in support of their newest full length record, “Lost Touch,” due out February 23rd on Victory Records.

The third single from the new album, “Ashley,” is 82 seconds of pure fun!  When asked about the single, vocalist Randy Frobel recalled:  “Shooting the video for ‘Ashley’ was an absolute blast, dodging balls, dodging balls, Nerf darts, toilet paper and a few eggs for good measure, as an older loving couple wreak havoc on the neighborhood pranking everyone in sight.  What more could you ask for? ‘ Ashley’ is a teen angst love song about that bad girl who lives a few houses down.  You know she’s trouble, but she’s everything you dream about.”

Watch the official video for “Ashley” below!

We Were Sharks are hitting the road with Belmont, Boys Of Fall, and Sink The Ship starting February 2nd hitting cities across the US.   Check out the tour dates below and make sure you get your tickets before they sell out.

Preorder your copy of “Lost Touch” on iTunes or Amazon now and get 3 instant grat tracks immediately!

Be sure to follow We Were Sharks and Secret Fangirls on Twitter for the latest on your new favorite artists.