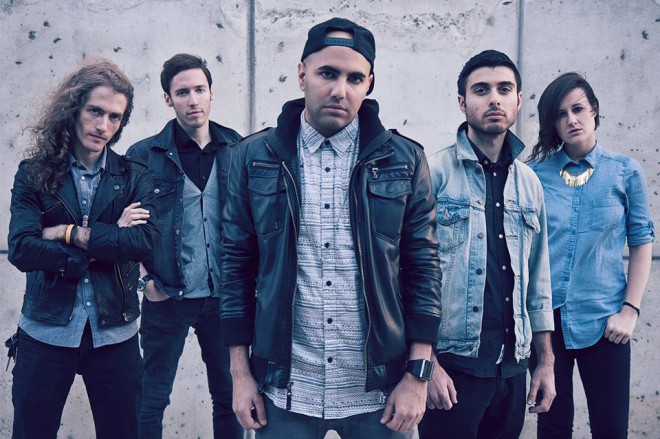 We Are Stations just premiered a brand new song on their Soundcloud called “Vagabond.”  The new track has the same modern/90s alt-rock sound we’ve come to love from We Are Stations, and totally gives us a nostalgic heart for the glory days of rock music.

Listen to “Vagabond” below or on Soundcloud.

NYC local alt rock band We Are Stations just premiered the much anticipated video for “Keep Your Head Up.”  Directed by Chris Castellino, the video shows how meeting that one special person can change your view on the world around you.  We love this upbeat track and its message.  Watch the video below!

Pick up a copy of “Keep Your Head Up”on iTunes or Amazon.

NYC based alt rock band We Are Stations just released their latest single titled “Messed Up” and we already have it on heavy rotation in the Secret Fangirl office.   The new single has more of the 90s alt sound we love, like in their first single “Keep Your Head Up.”   It’s everything we wanted and more.

Listen to the new single on SoundCloud below!

Pickup a copy of “Keep Your Head Up” on iTunes and watch our interview to get to know more about We Are Stations.

CMJ Music Marathon is a week long festival that literally takes over any and every music venue in NYC.  It’s an entire week filled with seminars on the music industry, concerts, and new emerging artists playing pop up shows all around the 5 boroughs.   It’s worth checking out a showcase or two, and we suggest staying to catch all of the artists – you never know, you might just find your new favorite band!  One of us worked the festival last year and it was one of the most fun experiences we’ve ever had!  Here are our top five picks for bands to catch at this year’s CMJ Music Marathon.

1. Born Cages
Coming back for round two at CMJ, Born Cages are ready to hit the ground running with their latest single “Rolling Down The Hill”.  The band are playing a few shows for CMJ this year so be sure to catch them this year.

2. We Are Stations
Playing their first CMJ festival this year, We Are Stations aren’t afraid to give it their all.  Armed with a Foo Fighters sound and positive songs that can turn that frown upside down, this is a show you don’t want to miss at CMJ this year.  When we spoke with the band over the summer, they teased each other as well as a possible EP!

3. The Ugly Club
If you like Walk The Moon, there’s a chance you might like The Ugly Club.  Despite their name, the band is actually really easy on the eyes but that’s just an added bonus.   Spot one of their stickers around the five boroughs and tweet a picture of it- there could be a surprise in store for you!

4. The Rare Occasions
Continuing the grunge trend in 2014, The Rare Occasions are here and they’re going to take over your playlists one song at a time. The bands latest single is huge and we will definitely have this in heavy rotation in the fangirl offices!

5. Bailen
Bailen (previously The Bailen Brothers), is made up of twin brothers, their sister, and a family friend and honorary Bailen.   They first caught our attention when they opened for CMJ alumni AJR earlier this year.   If you like infectious melodies and harmonizing siblings, Bailen is definitely worth checking out.

Local NYC pop-rock band We Are Stations sat down with us following their opening slot on the “Live Forever Tour” with William Beckett, Against The Current, and Paradise Fears at the Highline Ballroom in NYC.  We talked about everything from how they got their band name to which artists they’d love to collaborate with.  They also filled us in on their new single “Keep Your Head Up” and what’s coming up next for We Are Stations.   And you’ll never guess who  lead singer Steven is a (not-so) secret fan of.  Watch our interview below!

We Are Stations has a perfect 90s influenced sound, which we can’t get enough of.  Be sure to pick up a copy of “Keep Your Head Up” on iTunes now and check out We Are Stations on SoundCloud.  Stay tuned for upcoming We Are Stations shows – they are definitely an artist you need to know.

Follow We Are Stations and Secret Fangirls on Twitter for the latest on your soon to be favorite new artists!

NYC indie band We Are Stations recently premiered their brand new single called “Keep Your Head Up”, an upbeat track that will have you clapping along before it’s over.  The single showcases the bands songwriting ability and lead singer Steven Baggs’ Dave Grohl-esque growl.  We Are Stations has a guitar driven sound that brings back mid-90s alternative rock memories – something that is making a resurgence in pop culture.

Listen to We Are Stations’ new single “Keep Your Head Up” on Soundcloud below!

Pick up a copy of the single on iTunes now.  We Are Stations are playing tonight at NYC’s Highline Ballroom with William Beckett and Paradise Fears.   Tickets are available here.

Be sure to follow We Are Stations & Secret Fangirls on Twitter for the latest on your favorite new artists!