Heffron Drive kicked off their Summer mini-tour last night in front of a sold out crowd at NYC’s Webster Hall.  The tour is in support of the “Happy Mistakes Unplugged” album that bandmates Kendall Schmidt and Dustin Belt released earlier this year.   They played the full album from start to finish on acoustic guitars, bringing their full band along for the show.  The enthusiastic crowd sang along to every word.   You could tell it was an album they had lived with for a while.  Kendall and Dustin were appreciative of their support, thanking them for being there and that they could tell the crowd appreciated the band coming out as well.  It was a love fest all around.

When it comes to crowd interaction, artists either have it or they don’t.  Heffron Drive completely nailed it, responding to whatever the crowd shouted out without missing a beat, having small conversations with fans near the stage, and taking time to introduce each song.  It made the show seem even more personal and intimate. 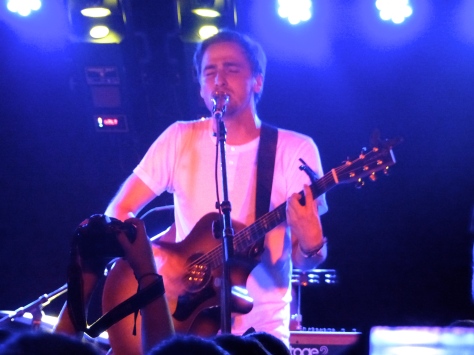 Highlights of the set included a stripped down performance of “Could Be Home,” which Kendall performed solo.  He said he wanted to have at least one track on the album that had “one vocal, one guitar, one take.”   More up-tempto tracks like “Had To Be Panama” and “Nicotine” had the whole place rocking, acoustic or not.  The album features a duet with Kendall’s Big Time Rush bandmate Logan Henderson, who sadly wasn’t available for the show to sing his part.  But no worries – the crowd filled in for his parts on “Passing Time” just fine!

Check out the rest of Heffron Drive’s tour dates HERE and pickup a copy of “Happy Mistakes Unplugged” on iTunes now!  Watch their video of “Division of the Heart” below.
Be sure to follow Heffron Drive & Secret Fangirls for more updates!

Kendall Schmidt and Dustin Belt are taking their acoustic project Heffron Drive on tour this summer!  The band just released their unplugged album and are ready to hit the road with The XFactor UK contestant Janet Devlin.  We’re super excited the guys will be back at the NJ State Fair This year.  Read our recap of last year’s show (funnel cake + good jams = definition of perfect Summer concert).  Check out all of the dates below!

Watch the official video for “Division Of The Heart” now.

Pick up a copy of Heffron Drive’s album “Happy Mistakes – Unplugged” on iTunes or Amazon now!

Heffron Drive just released their new video for “Art Of Moving On” off of their album “Happy Mistakes: Unplugged” which is due out April 28th!  The video is part of the bands’ “Live Sessions” series and features the full band behind Kendall Schmidt and Dustin Belt.

Watch the video below!

Pre-order a copy of Heffron Drive’s album “Happy Mistakes: Unplugged” on iTunes or Amazon now and check out the tracklisting below!   We are super excited to see a track featuring Mr. Logan Henderson!  (A BTR reunion?  We’re halfway there!)

1. Happy Mistakes
2. Parallel
3. Division of the Heart
4. Had to be Panama
5. Nicotine
6. Art of Moving On
7. Passing Time (feat. Logan Henderson)
8. Could You Be Home
9. That’s What Makes You Mine
10. Everything Has Changed