Our favorite summer activity is outdoor concerts, so we were extra thrilled when Heffron Drive announced they would be having a concert at the State Fair!   What better way to spend a summer night than riding a ferris wheel, having a major fat party (funnel cake and fried pickles anyone?), and seeing one of your favorite bands?   It really doesn’t get much better than that. 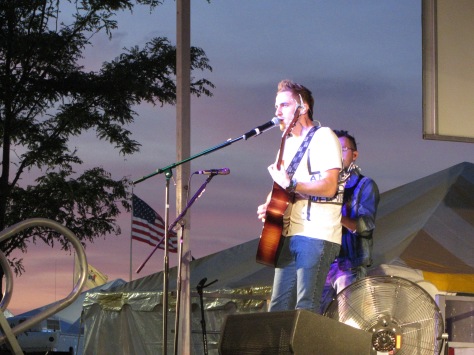 Heffron Drive is made up of bandmates and best friends Kendall Schmidt and Dustin Belt, who formed the group back in 2008 before Kendall joined one of our favorite boy bands, Big Time Rush.  Not wanting to breakup the group, Kendall recruited Dustin to play guitar for BTR on tour while they worked on both projects.   Heffron Drive has a completely different sound, and we love seeing both boy band Kendall and guitar wielding Kendall.

Their set included more recent material like “Art of Moving On,” the funky “Feels So Good” and the rocking “One Track Mind,” as well as pre-Big Time Rush tracks like “Quiet Please.”

While we miss Big Time Rush, we love seeing how passionate Kendall is on stage.  But don’t worry, BTR isn’t over!  Kendall said during the show that Big Time Rush is very much still a band, and he misses them, too.

Heffron Drive also performed solid covers of “Wake Me Up” and “Ain’t It Fun,” which Kendall said he wished he had written.  But our favorite moment was when Kendall asked if there were any *NSYNC fans in the house (us, obviously), as he intro’d his cover of Justin Timberlake’s “Not a Bad Thing,” which he said reminded him of a song *NSYNC would have written.  We couldn’t agree more!  Watch our video below.

Setlist: (not in order)
Art of Moving On
Wake Me Up (Avicii cover)
Better Get To Movin’
One Track Mind
Time Wasting
Ain’t It Fun (Paramore cover)
Feels So Good
Not A Bad Thing (Justin Timberlake cover)
Memories & Melodies
Quiet Please
Parallel

Visit our Tumblr & Youtube pages for more photos & videos from the show!

Heffron Drive have a couple of upcoming dates on the East Coast this summer, check them out if they’ll be near you!  Pickup a copy of their single “Parallel” on iTunes now so you can sing along!