They’re back with a madness!  Fall Out Boy are proving why they’re still the kings of pop punk even if you don’t think they’re pop punk anymore.  Pete, Andy, Joe, and Patrick just dropped their long awaited new album “MA N   I       A” and announced a massive tour for Fall 2018.  Get ready to sing until your lungs give out because they’re bringing Machine Gun Kelly with them and so many more friends!

Every Chicagoan dreams of playing Wrigley Field and FOB are going home for the show of a lifetime. With MGK and Rise Against, they’re playing the iconic stadium on Sept. 8th for one special night only.  Wrigley Field will include an Angels And Kings resurrection, an exclusive merch pop up store with new designs, old ones you thought you would never see again, and many more surprises!

Tickets for “The  MA  N    I        A ”  Tour go on sale Friday January 23rd at 10am local venue time.  Merch order presale codes are available through the FOB webstore and are available with any purchase of any merchandise item.  Want another chance for presale tickets?  Sign up for the Fall Out Boy mailing list and get another crack at tickets before the public on sale.   Check out all of the dates below and we’ll see you there!

Watch the brand new video for “Church” below. 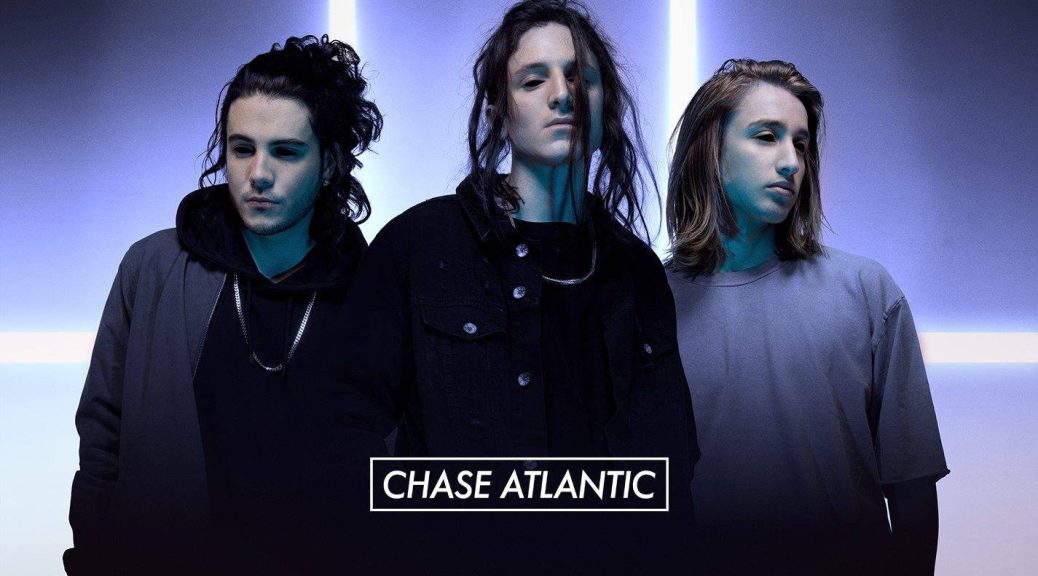 We’ve been hyped about Aussie trio Chase Atlantic for the better part of a year and a half and we’re stoked they’ve emerged from hiding with a new sound that is equal parts electronic pop, vibe-y rock, and hip-hop.  Mitchel, Clinton, and Christian dropped the first three songs of what will become their full length album earlier this year and they’re not slowing down with the second set of tracks aptly titled “Part Two.”  The guys just dropped a mini movie for their new song “Triggered” and it flows perfectly with the world they’ve built around the tracks.

We got the chance to speak with Christian, Mitchel, and Clinton about their new songs, what’s next for Chase Atlantic, and the night they partied with The Weeknd and Drake!  Read our interview with the guys below and get into it.

SecretFangirls.com: You guys just put out “Part Two” of what you’ve said will add up to your debut album.   What made you decide to release the new music this way?
Chase Atlantic: We haven’t released music for awhile now, and we wanted to show growth/progression of our sound leading up to the full length release.

You released the video for “Into It” on Snapchat and you’ve been putting the separate single videos together to create a total visual experience. What can we expect from the full “part two” or the final album visual experience?
Your mind will be blown!

“Cassie” was inspired by the character the show Skins and you’ve said you’re pretty big fans of that show. What other shows are you obsessed with right now?
Anything from Parasite/ Tokyo Ghoul (Anime’s) to Stranger things. We usually don’t watch a lot of TV but we highly recommend watching those Anime’s even if you’re not into cartoons. They will literally change your outlook on life! Also, we may have a song based around one of the shows coming out very soon! 😉

How would you describe a Chase Atlantic show for someone who hasn’t seen you live before?
We tend to be a lot more adventurous live. It’s like a rock show meets a hip hop show, we would encourage everyone to come see for themselves!

What are some “must haves” on your tour rider?
Our manager Andrew Spalter, and The Heinekens (or Bud Light, please sponsor us).

What artist would you or have you totally “fangirled” over if you met? Any stories?
We met Abel (The Weeknd) at a bar called Delilah in West Hollywood. We saw him at the bar and we told him how he was a big inspiration to us, and how much we respect him. He was very kind, and very down to earth. We partied together after hours and Drake privately DJ’d for us, it was a fun night.

What’s next for Chase Atlantic?   Any plans for more shows or a US tour?
Keep releasing quality content, and hopefully look to tour before the full album is released.

Or just search Chase Atlantic anywhere online! If you tend to forget names just think about the bank (Chase) and the ocean (Atlantic).

Don’t forget to grab a copy of “Part Two” on iTunes or Amazon.

Chase Atlantic are the heart of what’s new and fun in music and they don’t shy away from unorthodox ways of doing things. The guys just released their new video for “Into It” on Snapchat which is pretty dang cool if you ask us!  When they announced their tactic early in the week, we weren’t quite sure what to expect or how that was going happen since Snaps only last for 24 hours max unless the person who posted them saves them. We knew that we had to follow the guys to get the full story!  Pun fully intended.

Brothers Mitchell and Clinton Cave together with their friend Christian Anthony were just teasing us with their Snapstory music video because they released the entire music video on Facebook shortly after and quickly racked up 5k+ views on it!

The guys edited all of their fun and rowdy Snap stories together from the past couple of months to their new single, “Into It.”  There are snaps from the studio, the guys hanging with Benji and Joel Madden and the MDDN Co management team, traveling to NYC, and even some live shots of the band performing.  We love the creativity behind this video and can’t wait to see what Chase Atlantic come up with next!  Watch the video below.

Grab a copy of Chase Atlantic’s “Part One” on iTunes or Amazon now!

Chase Atlantic have been hard at work on new music for the better part of last year, but 2017 is the year brothers Mitchel and Clinton Cave, and their friend Christian Anthony, are ready to bring their dark electro-pop out of the shadows.

The Australian group just dropped a video for their new single, “Church.”  The track is from their EP, “Part One,” which has two other brand new songs on it.   We’re hoping the title means there is a “Part Two” around the corner soon!

Grab a copy of “Part One” on iTunes and Amazon now.

Be sure to follow Chase Atlantic and Secret Fangirls on Twitter for the latest on your new favorite artists!