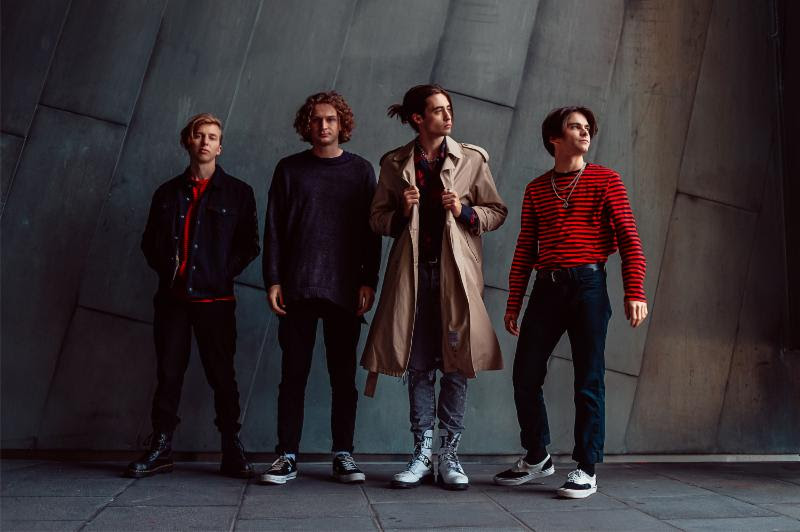 Australia’s latest export, The Faim are kicking off a massive tour with fellow Aussie pop punk band, Stand Atlantic hitting cities across North America and both bands are poised to take the American scene by storm.  The Faim just dropped their hotly anticiapted debut album, “State Of Mind” today, Friday, September 13th via BMG and we can’t wait to see them translate these songs to their high octane live shows!

Consisting of lead singer Josh Raven, bassist/keyboardist Stephen Beerkens, guitarist Samuel Tye, and Drummer Linden Marissen, The Faim’s debut album brings together all of the elements they’ve showcased in previous releases like “Saints of the Sinners,” “Midland Line,” and “My Heart Needs To Breathe.” The record perfectly displays the band’s ability to seamlessly flow from big gang vocal choruses in “Humans” to arena sized tracks that would be right at home in MSG like “Buying Time” which echoes early Panic! At The Disco.

“We wanted to show the variety of skills between the four of us,” says Stephen. “We wanted to stick true to our roots and where we came from, which is essentially just us being able to explore the passion and love we have for music,” Josh adds. “But we also wanted to experiment and to have fun with the songs.”

The record also features tracks like “Tongue Tied,” which is a heart pumping radio friendly track along side piano driven, introspective tracks like “Infamous” and “Where The River Runs.”  The band’s influences are prominent and frequently displayed with co-writes from the likes of Josh Dun of Twenty One Pilots, Pete Wentz of Fall Out Boy, Ashton Irwin from 5SOS, and Mark Hoppus from Blink 182.

The title track, “State Of Mind” closes out the record with singer Josh Raven forecully begging the listener “take a seat and let me introduce myself…” and flows along like a burning river of emotion.  The track clocks in at 4:41 making it the longest song on the record with a searing guitar solo to finish out an incredible debut effort from one of the most promising new Australian bands.

Listen to “State Of Mind” on Spotify now!

The Faim are heading out on a co-headline tour this Fall with Stand Atlantic hitting cities across the US! Check out the dates HERE and get your tickets before they sell out.

Make sure you grab your copy of “State Of Mind” on Amazon or Apple Music and stream it on your favorite streaming platform so you can sing along on tour.