Country music has taken over the US – even in major cities like New York.  And now it’s slowly making it’s way across the Atlantic.  Hunter Hayes just announced dates for a UK tour this Spring!  The dates coincide with the release of Hunter’s first official album in the UK, “I Want Crazy,” out May 25th.  The album will feature a mix of hits from Hunter’s self-titled debut, “Encore,” and last year’s hit, “Storyline.”  Listen to his newest single “Light Me Up” below!

Hunter Hayes “I Want Crazy” Tracklisting
1. I Want Crazy (Ryan Tedder remix)
2. Invisible
3. Tattoo
4. Light Me Up
5. Wanted
6. You Think You Know Somebody
7. Secret Love
8. What You Gonna Do
9. Everybody’s Got Somebody But Me (feat. Jason Mraz)
10. Somebody’s Heartbreak

You can pickup a copy of “Light Me Up, on iTunes now! Check out his upcoming tour dates below. His first headlining show in London sold out in seconds, so make sure to get your tickets when they go on sale this Friday, March 27th! 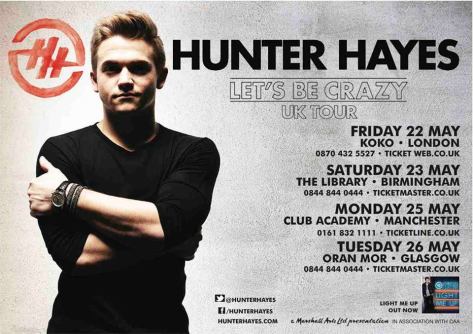