The Wanted surprised everyone when they announced that they’re getting back together for Tom Parker’s Inside My Head – The Concert at Royal Albert Hall on September 20th, 2021. They’re also releasing new music attached to the “Most Wanted: The Greatest Hits” album set for a November 12th, 2021 release. Now the guys are giving their fans the greatest gift ever – a brand new tour!

“Most Wanted: The Greatest Hits Tour” kicks off March 2022 in the UK and hopefully they’ll bring it Stateside soon!

Check out the tour dates below and don’t miss out!

Be sure to follow The Wanted and Secret Fangirls to stay up to date on your favorite artists.

WHAT A DAY!!!! The Wanted just announced that they are reuniting after a seven-year hiatus for Tom Parker’s “Inside My Head – The Concert” at Royal Albert Hall in London that will also feature some special guests like One Direction’s Liam Payne! All proceeds from the concert will be split between Stand Up To Cancer and The National Brain Appeal. Highlights from the show stopping concert will air alongside Tom’s Channel 4 documentary following the show.

The guys also surprised fans with another major announcement. They’re releasing “Most Wanted – The Greatest Hits” album on November 12th, 2021 and it’s packed with all of their smash singles like “Glad You Came,” “Chasing The Sun,” “Walks Like Rihanna,” and will include new music from the guys, too! But why stop there? The Wanted are plotting a UK arena tour for 2022! No details have been released for that just yet, but stay tuned because that tour will sell out FAST.

So much exciting news from Tom, Siva, Jay, Nathan, and Max – we can’t stand it! Check out the video announcement from the band’s Instagram below.

Make sure you follow The Wanted and Secret Fangirls to stay up to date with your favorite artists! 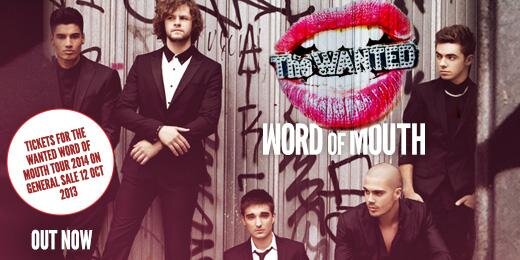 Bitter sweet news today for fans of The Wanted as the band announces a new music video for “Glow In The Dark” and that the band will be taking a break after the Word Of Mouth tour(at least they told us they’re taking a break and are still going forward with the tour – Jonas…we’re looking at you).

The band wrote a personal note on their website today to their fans stating they will “take time to pursue personal endeavors.”

To our amazing Wanted Fanmily, we have some very important news which we wanted to share with YOU first http://t.co/onE1mwuvrK

The Wanted are pleased to announce the release of their new video and single ‘Glow In The Dark’ taken from their November release ‘Word of Mouth’. They are very excited to perform ‘Glow In The Dark’ along with their smash singles ‘I Found You’, ‘Chasing The Sun’, and ‘Glad You Came’, amongst others for their fans on their upcoming Word of Mouth Tour.

This tour will be their last for a while as Tom, Max, Jay, Siva and Nathan have collectively decided to take time to pursue personal endeavours following the tour’s conclusion. The band wants to stress to their fans that they will continue on as The Wanted and look forward to many successful projects together in the future. They thank their fans for their continued love and support and look forward to seeing them on tour.

We’re really sad they’re taking a break but we wish each of them the best of luck in the future!
Follow the band on Twitter and Instagram.