The US Open is officially underway in New York City!  The annual Arthur Ashe Kids’ Day on Saturday kicked things off with a day full of games, music, and of course tennis.  Kids of all ages enjoyed activities around the grounds like face painting, balloon artists, dance offs, juggling, and of lots of chances to test their tennis skills!

The AAKD show inside Arthur Ashe Stadium featured performances by some of the hottest names in music along with appearances by tennis stars like Rafael Nadal, Novak Djokovic, and Sloane Stephens.  The event is in celebration of tennis legend and humanitarian Arthur Ashe and promotes the USTA’s flagship program, the National Junior Tennis and Learning Network (NJTL), which Ashe co-founded.  Players from local NJTL chapters had the chance to show off their skills on court in a series of agility and tennis drills.

The show was co-hosted by Radio Disney’s Morgan Tompkins, Meg Donnelly, and JD McCrary.  Radio Disney’s Next Big Thing JAGMAC kicked off the show with a high energy performance that set the tone for the whole show.  They definitely brought the party with them!  We’re sure you’ll be seeing much more of them in the future!  Radio Disney is celebrating 10 years of NBT artists this year, and past honorees include Shawn Mendes, Camila Cabello, and Kelsey Ballerini.

Austin Mahone returned to Kids’ Day (he was also a featured performer in 2013!) to perform his new single “Dancing With Nobody” live for the first time.  Austin showcased his signature smooth dance moves on the court, complete with a moonwalk across the service line.  He also shared that he will be dropping a new album next year! 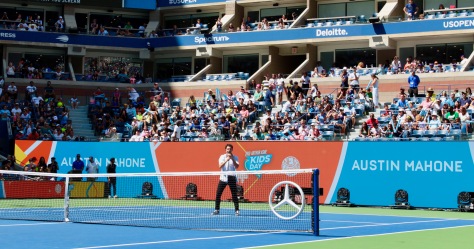 Co-host Meg Donnelly did double duty and performed “With U,” showing off her dance moves and high kicks across the court in style.  We love her fun pop sound and can’t wait for her album to drop!  Meg is also a Radio Disney Next Big Thing alum!

The always talented and lovely MAX sang his hit single “Love Me Less,” with a special appearance by Quinn XCII.  Watching these two perform together is so much fun and we loved seeing them rock it on center court!

Ava Max’s infectious sound and unique style have already won over the hearts of many.  Ava got the stadium rocking with her hit “So Am I.”  We are so excited to see and hear what’s next, and are looking forward to her debut album coming soon!

The show ended with a big finale that had everyone doing #TheGitUpChallenge! Blanco Brown sang “The Git Up” from up in the crowd, as the court was filled with dancers, the Blazer Fresh squad, Net Generation players, and even a drumline!  Current world #1, Novak Djokovic, never turns down an opportunity to dance at Arthur Ashe Kids’ Day, so of course he was right in the middle of it all!

Arthur Ashe Kids’ Day is always such a blast and the best way to get the last slam of the year underway!

Make sure you watch our interviews with MAX and Quinn XCII, JAGMAC, Ava Max, Austin Mahone, and JD MCCrary to learn more about the artists and what’s coming next.

Be sure to follow the US Open and Secret Fangirls for more updates!