You know you’re in for a good night when a show kicks off with a blast of confetti!  Jake Miller kept the energy level high from start to finish at the second stop of the Dazed and Confused Tour at the Best Buy Theater in NYC last night.   The concert was one big dance party, led by Jake and his DJ.

Jake surprised everyone by dropping an EP the day of the tour kickoff.  The “Rumors” EP had been out approximately 44 hours by the time of Jake’s NYC show, but that didn’t stop the crowd from knowing every single word to the new tracks.  He played nearly the entire EP:  “Rumors,” “Shake It,” “Selfish Girls,” and “Yellow Lights” were all highlights of his set.

Jake took time to interact with fans in the crowd, asking how long people had been in line (11 hours for one, and overnight for another in the front row!)    Of course, when Jake called out some fans to say “hey, what’s your name?”  he had to do it twice so they could take a video.

Other highlights of the set included a cover of “Uptown Funk,” which Jake turned into a club remix (like we said, one big dance party).  One of the most touching moments of the set was Jake’s performance of “A Million Lives,” which he said would be many fans’ favorite moment of the show.  The song perfectly captures the relationship between an artist and fan, and the power of music.

Jake even invited a lucky fan on stage to rap with him during his encore of “Dazed and Confused.”  Watch the video below!

Pickup a copy of the “Rumors” EP on iTunes and check out all of Jake’s upcoming tour dates HERE!

Be sure to follow Jake Miller and Secret Fangirls for more updates! 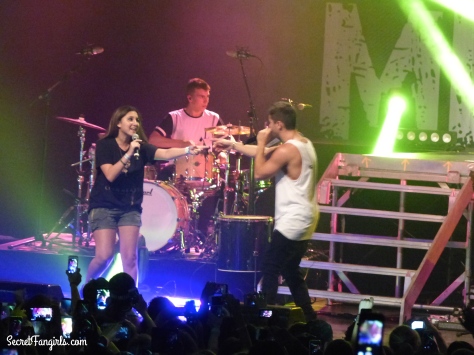