Davis Cup Semi-Finals Set
We always love Davis Cup weekends!   Since tennis is such an individual sport, it’s fun to see the players in a team setting, playing not just for themselves but for their country.  The crowds are always excellent, loudly and festively supporting their nation.  Over the weekend, 8 nations faced off for a spot in the semi-finals.  Australia defeated the USA 3-2, led by a focused Nick Kyrgios and captain Lleyton Hewitt.

That's what it's about 🇦🇺🌈🦁 @lleytonhewitt89 #daviscup

France had a straightforward victory over Great Britain, winning both singles rubbers on Friday and doubles on Saturday to seal the victory.   Even though they were out with injuries, Richard Gasquet and Pierre-Hugues Herbert were there to cheer on the team in Rouen.

The semi-finals will take place on September 15-17th, just after the conclusion of the US Open.  Belgium will host Australia, while France will host Serbia.

Memphis Open to Move to Long Island, NY
The Memphis Open is leaving its home in Tennessee after a 41-year run.  The ATP 250 event is moving to the newly re-opened Nassau Veterans Memorial Coliseum in Hempstead, NY in 2018.  GF Sports partnered with Brooklyn Sports & Entertainment to move the tournament to the new venue.  Next year’s event will take place February 10 – 18.   We’re thrilled to see more tennis in NY!

Clay Season Is Here!
The tour has officially moved to the clay courts, with just 6 weeks to go until Roland Garros!   This week, Grigor Dimitrov is the #1 seed in Marakesh while Jack Sock is the #1 seed in Houston.  Both players have had an outstanding season so far in 2017 and let’s see if they can keep the momentum going on the clay!

Ryan Harrison Wins 1st ATP Title
24-year-old American Ryan Harrison won his first ATP title at the Memphis Open!   The win puts Ryan back up to his career high ranking of #43 in the world, which he first reached in 2012.  Since his breakout, Ryan has had a tough few seasons, but he never gave up.   Ryan made it to both the singles and doubles finals in Memphis, with partner Stevie Johnson.  Even though he lost in the doubles final, it means Ryan gets the full set of Memphis trophies:  a Gibson guitar as singles champion, and a gold record as doubles runner-up.   We’re glad to see Ryan playing well and hope he can keep the momentum going!

First @atpworldtour title! So blessed with how many good people who have always been there for me. The love and support is so appreciated. Thank you all for everything! It's been a week I'll never forget. @memphisopen

Juan Martin Del Potro Back In Action
Delpo is back this week, playing his first tournament of 2017 at the Delray Beach Open in Florida.  Delpo decided to take a longer off season to rest, after leading Argentina to the Davis Cup title in late November of last year.    Delpo’s 2017 campaign kicks off tonight against Kevin Anderson.  Vamos!

World Team Tennis Marquee Draft Announced
The Mylan WTT marquee player draft took place last week,   and we are already excited for what looks to be a fun season coming up this Summer!  Jack Sock was the first overall pick, tapped by the Springfield Lasers to head up their team.  Genie Bouchard, John Isner, and Mardy Fish will join the New York Empire, who are moving their home court from Forest Hills to the USTA Billie Jean King National Tennis Center and US Open fan favorite Court 17.   Venus Williams, the Bryan Brothers, and Martina Hingis will play for the Washington Kastles, while Andy Roddick and Sloane Stephens join the Philadelphia Freedoms.  Stay tuned for additional player announcements and the full schedule coming up in March.  The dates for this year’s World Team Tennis season are July 16 – August 2nd, with the finals on August 5th.

Vasek Pospisil to Launch YouTube Channel
Canadian player Vasek Pospisil announced he will launch his own YouTube Channel this Friday, February 24th.  The channel, which he has been working on for some time, will take a look at Vasek’s life off the court.  You know we’ll be tuning in!  #AnythingIsPospisil

Last week on the ATP World Tour was an exciting one for us, with several of our favorite players making the finals!   Here’s our roundup of the tennis news of the week.

Taylor Fritz Makes First Final
The 18-year-old American made his first ATP World Tour Final in just his 3rd event on tour.  To put that in perspective, it took Roger Federer 21 tour events to reach his first tour final.  We were rooting for Fritz all week and are looking forward to more!  Also, the Memphis Open officially has the coolest trophies on tour. 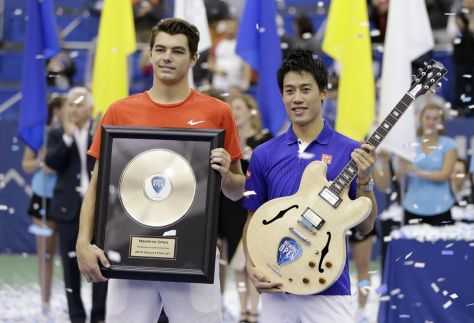 Dominic Thiem Beats Nadal, Wins Argentina Open
Thiem was impressive in beating Nadal (on clay!) and followed it up with a 3 set win over Nicholas Almagro to win the title.  Too often we’ll see players follow up a big win with a loss in the next round, so we’re glad to see Thiem get the win! 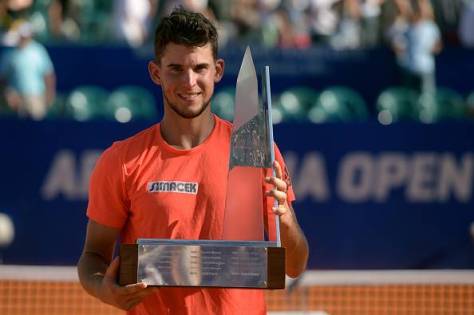 Milos Raonic Plays NBA All Star Game
The 6’5″ Raonic was impressive at the NBA All Star Game in Toronto over the weekend, making a slam dunk look just as easy as one of his (scarily) fast serves.

Last tennis player to throw it down? Toronto's own Milos Raonic! Coach @Drake diggin' it! #DewCelebGame on ESPN https://t.co/qXXrbAtguz