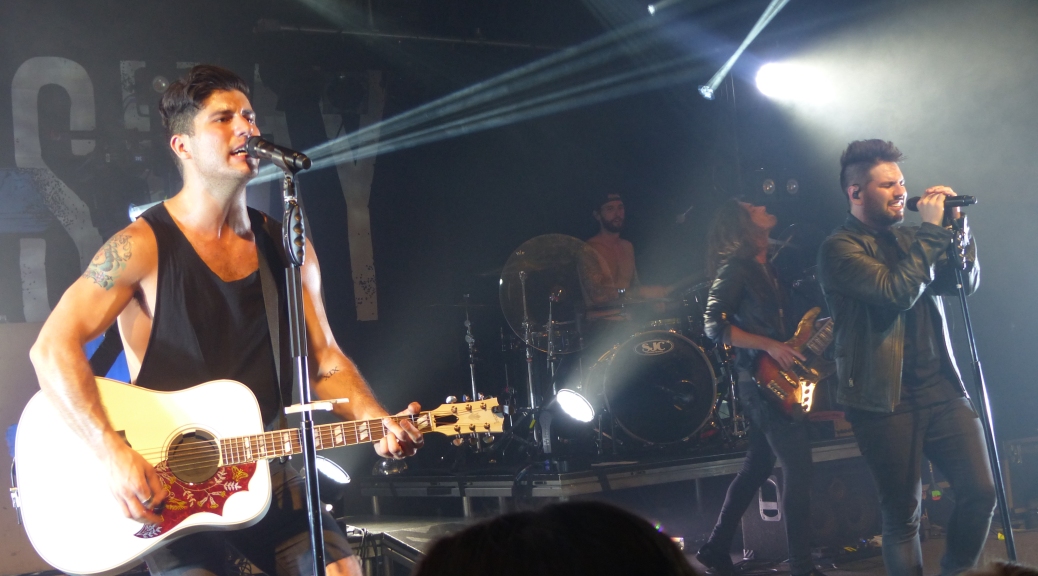 Dan + Shay’s “Where It All Began Tour” stopped at a packed Starland Ballroom in NJ on Saturday night.  If you’ve been to any concert in New Jersey, you know the crowds can get crazy, and this was definitely one of the best we’ve experienced.   It’s been wonderful to see the support for Dan + Shay grow since we first saw them around a year ago (Mohegan!)  and their live show is not to be missed. There’s nothing like a first time feeling, but they just get better and better each time we see them.

Opening act Canaan Smith got the crowd pumped up with his hit single “Love You Like That,” and songs from his recently released EP like “Hole In The Bottle” and “Mad Love.” Canaan also played a serious rock cover of Nick Jonas’ smash single “Jealous.” The Virginia native knows how to get a crowd singing and dancing along even if they’re not familiar with him.

One of the best things about watching Dan + Shay perform is seeing just how much they love being on stage.  If you can find something to do that makes you half as happy as they are performing, then you’d be pretty lucky.   Their passion and energy on stage is unrivaled – they really give it all on stage night after night.   And still make time for a post-show meet and greet.  We still get chills every time during “19 You + Me” when they let the crowd sing, and see their genuine reaction to having people sing one of their songs.  Although really the whole concert is one big singalong from start to finish. They played almost every song from their debut album, “Where It All Began,” a fun new track, “Partner in Crime,” and a few covers for good measure.

They certainly know their Jersey audience, as their set included covers of Journey and Def Leppard, and a little Guns N Roses, proving they know how to rock.  As we’ve said before, we’re sure they would have found success in any genre they chose, but we’re sure glad they chose country!   Shay Mooney’s voice is also chill-inducing, and harmonizes perfectly with Dan Smyers, who played both guitar and piano during the show.

As usual, they had a small acoustic set before the concert AKA the return of the Tent Concert Series, where it all began for the duo.  The acoustic set gives fans a chance to ask questions, hang out with the guys, and hear a couple of songs in an intimate setting before the show.  We are always impressed by how great Dan + Shay are to their fans, and how much they appreciate each person that comes out to see them.

Dan + Shay are nominated for Duo of the Year at the ACM Awards for the 2nd year in a row!  Make sure to tune into the awards on CBS April 19th to cheer them on and catch their performance with Nick Jonas!

Set List:
Somewhere Only We Know
Nothing Like You
Stop Drop & Roll
Parking Brake
Any Way You Want It (Journey cover)
Partner in Crime
Close Your Eyes
Thinking Out Loud (Ed Sheeran cover)
Show You Off
Pour Some Sugar On Me / Meet In The Middle
What You Do To Me
Red Dirt Road (Brooks&Dunn cover)
Party Girl
First Time Feeling
Can’t Say No
Dynamite / Moves Like Jagger
19 You + Me

Be sure to follow Dan + Shay & Secret Fangirls for more updates!