Rafael Nadal Plays 1000th Career ATP Match
Nadal played the 1000th match of his career at the ATP World Tour Level at the Miami Open over the weekend.   He defeated Phillip Kohlschreiber 0-6, 6-2, 6-3 to gain his 822nd victory on tour.  The match was just the 3rd time in Rafa’s career that he’s come back to win the match after getting “bageled” in the first.  Nadal takes on Nicolas Mahut in the 4th round in Miami today.   Vamos!

Iggy The Iguana Takes Over Miami
Tommy Haas also posted a photo with the now famous “Iggy” the Iguana at the Miami Open.  Haas captured the selfie mid-match, after a giant iguana came onto the court, halting play as linesmen scrambled to catch him.  (He’s a fast one!)

Special selfie @miamiopen , thanks for coming out to watch some Tennis 🎾🦎

Linesman Frankie Melendez, who eventually caught the iguana, is the real hero.

Jo-Wilfred Tsonga Welcomes First Child
Tsonga announced the birth of his son on social media.  We hope he gets his dad’s amazing hair (and tennis skills!)

Introducing the (One-Handed) Backhand Boys
Roger Federer may have won the BNP Paribas Open in Indian Wells over the weekend, but he also won the internet and the hearts of fangirls around the world with the return of the Backhand Boys.  Federer joined fellow one-handed backhanders Grigor Dimitrov and Tommy Haas for a singalong of Chicago’s “Hard to Say I’m Sorry.”  You might recall the trio singing  together back at the Australian Open, and this new video shows they’ve been working on their moves and their vocals.  Tour soon?

As much as we love the Backhand Boys, we think they could use a couple of extra members to make up the classic 5 member boyband!   We’d love to see Stan Wawrinka, Dominic Thiem, Richard Gasquet or Feliciano Lopez join the lineup.  Auditions in Miami?

If I switch to a one handed backhand can I join the band?? #worthit @rogerfederer @TommyHaas13 @GrigorDimitrov https://t.co/vbZ4Q0s6vG

The Backhand Boys could use a rival boyband just to keep things fresh.  May we present *NSYDE OUT led by some of the best forehands on the ATP Tour: Juan Martin del Potro, Jack Sock, and Rafael Nadal with Vasek Pospisil (he so needs/wants to be in a boyband) and Pierre-Hugues Herbert. 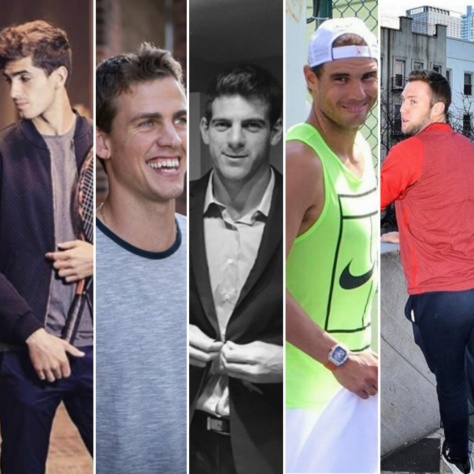 Denis Shapovalov Wins 1st Challenger Title
#NextGenATP player Denis Shapovalov won his first challenger title over the weekend in his native Canada at the Challenger Banque Nationale Drummondville.  At 17-years-old, Denis is the youngest ATP Challenger winner so far this year and now the youngest player in the top 200.  Denis defeated his friend and countryman Felix Auger-Aliassme in the semi-finals en route to the title.

My first ATP Challenger tour title in my home country here in Drummondville. Special thanks to my great team to help me win this amazing title. Thanks to all of my sponsors for their support, #nikecourt #biosteel #wilson #banquenationale

Gael Monfils Out With Injury
Gael Monfils is one of the most entertaining players in tennis, with an explosive game and incredible athleticism.   Unfortunately, his big game has led to quite a few injuries over the years, and Gael’s latest setback is a tear in his Achilles’ heel and chondropathy Patella.  He is out of the Miami Open and will start rehab.  We hope to see Gael back on court soon!  (so we can see more shots like this)

ATP University Class of 2017 Graduate in Miami
Every year in Miami, the ATP World Tour hosts “ATP University” for the youngest players on tour.  The 3-day program teaches the players about life on tour including player relations, social media, nutrition, and finance.  It also gives the new players a chance to get to know each other and adjust to their hectic new schedule.  This year’s class included young Americans Reilly Opelka, Noah Rubin, Michael Mmoh, and Stefan Kozlov.

Roger Federer Covers GQ‘s April Issue
Things can be rough for a tennis fan in the off-season.  It’s hard to fill the time normally spent with following scores and matches across the globe with some non-tennis related activities.  Which is how back in December, with no brackets to fill out, tennis fans made it their priority to vote Roger Federer as the Best Dressed Man in GQ‘s Most Stylish Man poll.   Federer won the poll in a landslide, taking out Kanye West, Ryan Gosling, and more in the process.  With his new honor, Federer is on the cover of GQ‘s April issue.  Read the story here!

@RogerFederer is on the cover of GQ's 2017 #StyleBible. See more photos at the link in bio. (📸 @craigmcdeanstudio)