Roger Federer Wins Sunshine Double
Roger Federer’s incredible comeback continues!  He pulled off the “sunshine double” (aka winning both Indian Wells and Miami) for just the 3rd time in his career, defeating Rafael Nadal in the Miami Open final 6-3, 6-4.   It’s Federer’s 3rd title of the 2017, and the 3rd time he’s played and defeated Nadal this year.  2017 has been a fun year for tennis, hasn’t it?   Federer did say on court that he’d be sitting out most of the clay season and his next tournament would be Roland Garros.

Davis Cup Quarterfinals This Weekend
The Davis Cup is back April 7-9!  The World Group Quarterfinals are taking place in venues across Europe and Australia.  We’re looking forward to the tie between the US and Australia as John Isner, Jack Sock, Sam Querrey & Stevie Johnson take on Nick Kyrgios, Jordan Thompson, Sam Groth & John Peers.

It's #DavisCup week 🎉 Can Australia 🇦🇺 exact revenge on the USA 🇺🇸 team that defeated them in last year's first round? 🤔 pic.twitter.com/wCBA3oJOzd

The #NextGen is Coming
#NextGen ATP stars Sascha Zverev and Jared Donaldson were both impressive in Miami.  Sascha defeated John Isner (saving 3 match points) and Stan Wawrinka en route to the Quarterfinals, where he fell to Nick Kyrgios in one of the best matches of the Miami Open.  Jared Donaldson played his way through qualifying and made it to the 4th round.  He eventually lost to Jack Sock, but his run in Miami brings him to a career high of 75 in the ATP rankings.

A rivalry for the ages. See you again my friend 🙏🏽🎾

Tennis Watching Etiquette
We’ve covered concert etiquette before, and after watching the match between Nick Kyrgios and Roger Federer last week, we feel the need to address tennis watching etiquette as well.  If you’re lucky enough to be watching a professional tennis match in person, here are some things to keep in mind.
1. Cheering in support of your favorite player is fine, but show some respect for the other player.  Calling out against them, cheering negative things, or playing linesman and calling close balls “out” is rude and distracting to both players.
2. Learn when to cheer and when to be quiet.  Generally speaking, if the ball is in play, that’s your cue to sit and watch.   Between points, cheering is welcome and encouraged!   But please do not applaud double faults and do not call out in between 1st and 2nd serves.
3. Wait for the changeovers to enter or leave your seats.  It’s distracting to both the players and the other fans in the stadium to have people constantly going in and out.
4. Enjoy points like this! 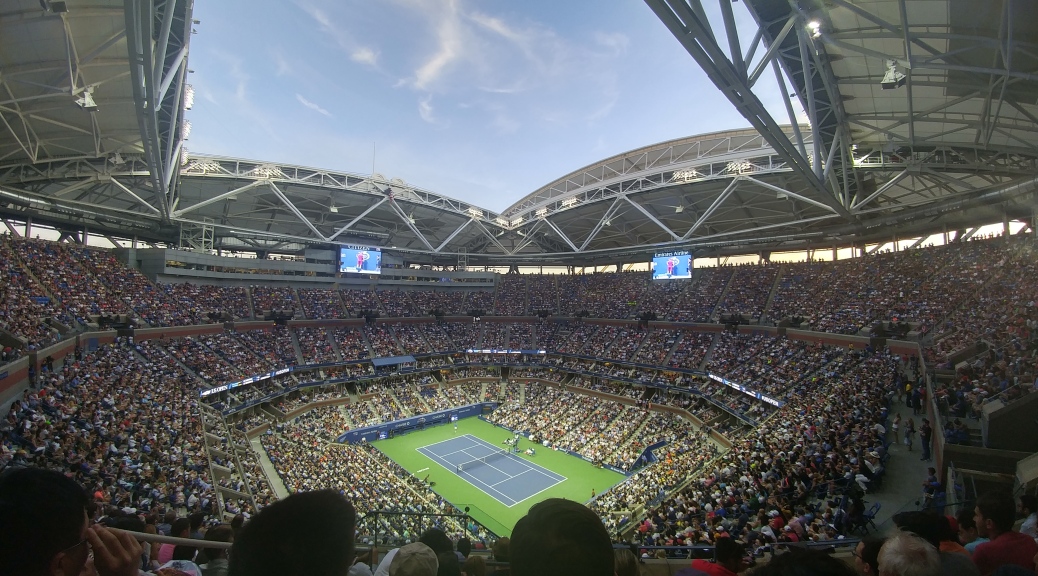 After a busy two weeks at the US Open, we’re back to your regularly scheduled posting.  We had a blast seeing so many of our favorite players up close, and caught some incredible matches.  We’re already counting down until next year!

Stan The Man
Stan Wawrinka proved he most definitely is the man, defeating Novak Djokovic in the final to win his 3rd major title at the US Open.  Stan had a tough path to the finals – he was down match points in the 3rd round to Dan Evans – but was able to win with his excellent shot making (that backhand!) and mental toughness.

Juan Martin del Potro Is Back
Delpo’s comeback to tennis has been incredible and inspiring, and he brought us all to tears yet again at this year’s US Open.  Delpo made it all the way to the Quaterfinals before losing to eventual champion Stan Wawrinka.  Ole, ole, ole, ole, Delpo Delpo!

Kerber is #1
Angelique Kerber was impressive in her run to the final, winning her first US Open and her second major of the year.   Kerber also is the new world #1!

The #NextGen Is Coming
We tried to catch as many of the #NextGen players as we could at the US Open this year.   Frances Tiafoe and Taylor Fritz were impressive in taking the more experienced Americans, John Isner and Jack Sock, to 5 sets in the first round.  Jared Donaldson made it through qualifying and to the third round, and entered the top 100 for the first time.   Kyle Edmund took out 2 of our favorite players (Isner and Richard Gasquet) before falling to Novak Djokovic.

Davis Cup Semi-Finals This Weekend
We’re in that weird post-slam state where there isn’t even a 250 event to get excited about this week.  Lucky for us, the Davis Cup Semi-Finals and World Group Playoffs kick off on Friday!   Great Britain will host Argentina and Croatia will host France in the Semis.  We’re excited to see Juan Martin Del Potro play again for Argentina, and are hoping Team France will make it all the way!