Tennis in 2016 has gotten off to an um, interesting, start.  And it’s only March!  Which means two of the biggest tournaments in the US are coming up, with Indian Wells starting on Wednesday and the Miami Open at the end of the month.    Here’s our roundup of the news of the week.  Happy World Tennis Day!

Davis Cup Quarterfinals Set
After a drama filled weekend and some great matches, the Davis Cup quarterfinals are set!  The next round takes place July 15-17, just after Wimbledon.  We’re thrilled the US is back in the quarters after a 3 year absence (and are hoping the tie will take place somewhere near NYC so we can go!)   John Isner was impressive in his 2 wins, even hitting one of the fastest serves on record (157mph).

Awesome week here in Melbourne. Amazing play by the big man @johnrisner and the bros to help get the W! Go Usa!!!!! 🇺🇸🇺🇸🇺🇸 @bryanbros @mikecbryan

World Tennis Day
Today is World Tennis Day!  Celebrations are happening all over the world, including the BNP Paribas Showdown tonight at Madison Square Garden.  The event features Gael Monfils vs Stan Wawrinka and Serena Williams vs Caroline Wozniacki in an exhibition match.  Tickets are available here.  The event kicks off a month of fun activities hosted by the USTA.   Visit their website for more info. 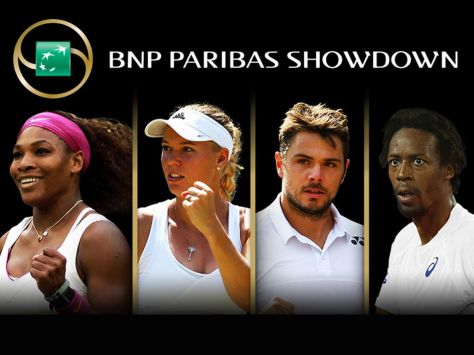 Maria Sharapova Announcment
Rumors started flying as soon as Maria gave notice of a press conference on Monday, with a “major announcement.”  Would she be announcing her retirement?  A new Sugarpova flavor?  It turned out to be neither.  Maria tested positive for a banned substance at the Australian Open, taking full responsibility in her press conference which you can watch below.  One thing is for sure, when she does announce her retirement, it will not be in a place with ugly carpet.

ATP World Tour Announces “Next Gen”
The ATP announced their “Next Generation” Campaign for 2016, featuring 14 of the hottest young stars under 21.  The list includes Americans Taylor Fritz, Jared Donaldson, and Frances Tiafoe, along with Borna Coric, Thanasi Kokkinakis, Nick Kyrgios and more.  Get to know the “next gen” here!  (side note: that Nike kit is almost the official uniform of the #nextgen)

Jack Sock Signs with Nike
Speaking of that next gen Nike kit, Jack Sock will also be sporting the look starting with Indian Wells!  He just signed a new deal with Nike, leaving old sponsor Adidas.

Stoked to be joining the @Nikecourt team! Let's change the future of tennis together. 👊🏻 pic.twitter.com/UdlXwc8iml