Game 3 of the Stanley Cup Playoffs are tonight at Madison Square Garden!  While tennis is generally the only sport we watch (it is the ultimate fangirl sport), we have been known to tune into a hockey game now and then.  Especially when our home team, the New York Rangers, is playing a must-win game against the Los Angeles Kings.   As casual hockey viewers, we like to break things down into terms we can understand.  And as 90s fangirls, this means “The Mighty Ducks” trilogy.  Especially now we hear that there are talks of making a Mighty Ducks 4!  (Check out this amazing Oral History of “The Mighty Ducks” Trilogy on Time.com!) 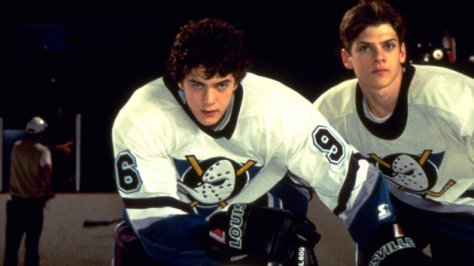 Unfortunately, none of the players are as adorable as Team Captain Charlie Conway or Adam Banks, AKA the original Bansky.  And you generally won’t see many closeups of Coach Gordon Bombay, stressed out and cheering the team on from the bench.  You also won’t be seeing Julie the Cat Gaffney or Connie on either team – men only in the pros!  Most goalies, like Goldberg, will fall down.  A lot.  Don’t be afraid to sub in a new goalie – it just might win you the tournament!

We have some advice for the Rangers:  Try a flying V!   It works every time.  And if you’re in trouble, you can always call in Randy, AKA Kenan Thompson, to hit one of his infamous knuckle pucks!

Just whatever you do, don’t mess with Iceland, they play dirty. (The Kings even have a player with the last name Stoll – look out for him)   Learn from the Bash brothers – it may seem like a great idea to knock out anyone that gets in your way, but that will land you time in the penalty box.

And Remember:  Ducks Fly Together!

Maybe a little “We Will Quack You” will pump up the team?

Watch the Stanley Cup playoffs between the New York Rangers & the Los Angeles Kings tonight on NBC at 8pm EST!   Or you can just rewatch The Mighty Ducks trilogy on Netflix.